By Joyce Lobeck, contributing writer to Arizona Farm Bureau: From a positive report on the current status of the Colorado to demonstrations of innovative farming equipment and an inspiring presentation on a new agriculture workforce program at a college in Salinas, this year’s Southwest Agriculture Summit offered a full two days of cutting-edge information for the agriculture industry in the Yuma area. 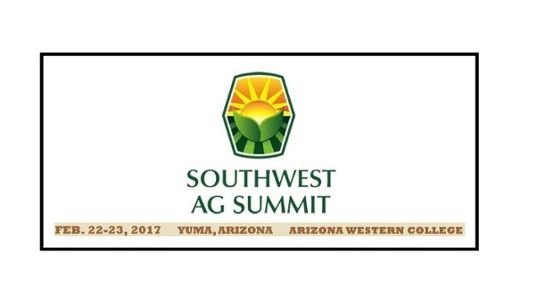 The summit just keeps getting better and bigger as it strives to broaden its appeal, said Bruce Gwynn, coordinator for the summit put on by the Yuma Fresh Vegetable Association in partnership with the Arizona Western College Foundation, University of Arizona and Yuma County Farm Bureau.

He said attendance at the 11th annual event held Feb. 22-23 at AWC was the largest ever, “north of 900 people” when counting the more than 100 high school students who participated in the career day held as part of the summit.

And the summit continues to draw an ever-broader audience that isn’t limited to the Yuma-area agriculture industry. People from all over the United States and other countries came to attend the summit, participate in the discussions and demonstrate their equipment and products.

Gwynn was especially pleased about the attendance by seven members of the Navajo Agricultural Production Industry, which farms over 82,000 irrigated acres in New Mexico. “They were excited to be here and took part in everything,” he said. They even went on the advanced farm tour offered the day after the summit. “And they’re coming back next year.”

Perhaps some of the best news to come out of the summit was a report by Chuck Cullom, Central Arizona Project Colorado River programs manager. The snowpack for the Colorado River Basin is currently 120 percent of the seasonal average and this year’s runoff is anticipated to exceed 27 percent of normal.

In addition, drought conditions in California have declined substantially in recent weeks due to heavy rainfall and snowpack in that state, lessening its dependence on the river, at least for now. 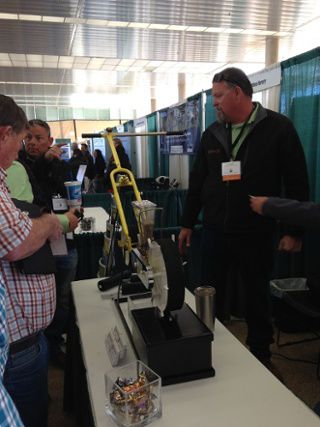 78 participated in this year's Summit, a record.

As a result, Cullom said, there’s a significant decrease in the risk of a shortage being declared for the river over the next few years. While that’s welcome news, he and others remain concerned about the sustainability of the river’s system and its long-term ability to meet water needs of the states that rely on it for urban use and farming.

That’s because there’s a “structural deficit” that causes Lake Mead’s elevation to drop about 12 feet every year, drought or no drought, Cullom explained.

In a “normal” year, the U.S. Bureau of Reclamation releases about 8.23 million acre-feet from Lake Powell for delivery to the Lower Basin states of Arizona, and Nevada as well as Mexico. But Lake Mead loses around 600,000 acre-feet annually due to evaporation, a loss that generally isn’t taken into account.

If a shortage is declared, it would be Arizona – in CAP, a major source of water for Central Arizona – that will take the first and biggest cut due to an agreement with California that paved the way for construction of the CAP project. If Lake Mead falls below 1,075 feet, the trigger level for declaring a shortage, CAP could lose 20 percent of its share of the river water, Cullom said.

And that would have serious repercussions for the entire state, he said. “We can fight about it or we can work collaboratively. Long term we need to strategize and augment the system to reduce the demand on the river.”

That new spirit of cooperation is resulting in a variety of conservation projects and other innovative programs, he said. “We’ve been investing significant money to keep Mead above 1,075 feet. All river users need to help protect Mead and Powell.” 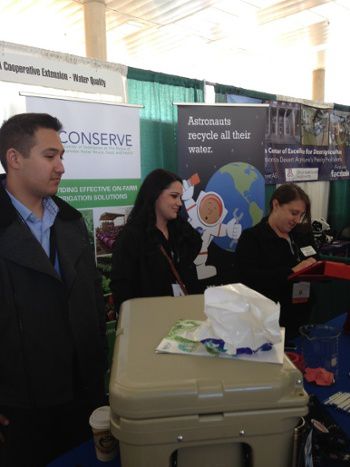 Booth and breakout session focused on nontraditional water sources such as reclaimed water and efforts to educate the public about them.

On another subject, growers were able to get an up-close look at new and developing farming equipment. Of particular interest that take over labor-intensive tasks such as in-row cultivation, mechanical weeding, pesticide spraying and bird deterrent. Among the researchers and manufacturers who brought in state-of-the-art and even experimental equipment was KULT, a German manufacturer of innovative weeding machines who was back for year. And they’re coming again next year, Gwynn said.

A highlight of the summit, Gwynn said, was a presentation during lunch by a panel from Hartnell College in Salinas, Calif., that discussed the college’s new Agricultural Business and Technology Institute. Titled "Partnerships that create a strong workforce for the dynamic agricultural industry," the presentation drew a lot of interest as a possible model for a similar program in Yuma.

He said the industry needs diesel mechanics to operate and fix the new tractor technology, marketing professionals, accountants to keep their books and engineers.

While a relatively new program, the institute is already producing many success stories.

Jose Ramon shared his. He said he had two weeks of high school then dropped out to pursue a criminal career instead. The birth of his child when he was 19 was a “wake up call. My job options were limited and I couldn’t pass a Walmart background check.”

Completing his GED, he enrolled at Hartnell and picked agriculture as a career path because his parents were field workers. Today he serves as the procurement officer in both Salinas and Yuma for Apio Inc., a supplier of fresh-cut vegetables.

Gwynn said he had seen a video on Hartnell’s agriculture workforce development program about six months ago and sent it to “everyone I know” from Toni Badone, superintendent of Yuma Union High School District, to AWC President Dr. Daniel Corr.

Gwynn noted that Hartnell was “so generous. There was no charge for the five people to come. The presentation was in the spirit of cooperation. They want to partner with Yuma on some things.”

It would be a natural as Salinas is the summer equivalent of Yuma’s winter vegetable production, involving the same companies and many of the same people.

“It’s a great program and it should be our story,” Gwynn concluded. “A lot of students, and counselors aren’t aware of the great jobs in agriculture. There are wonderful jobs … great careers. You don’t need a farm to have a great agriculture career … but thousands of jobs are going unfilled. The biggest lesson from Hartnell is that the measure of success is when students can walk out of school and get a job. If they can’t get a job we’re not doing the right thing.”