Speak Up for Rescinding and Revising WOTUS

By Staff Reports for Arizona Farm Bureau: On February 28, 2017, President Trump signed an Executive Order to review the 2015 Waters of the U.S. (WOTUS) rule and to rescind or revise that rule as appropriate based on the new Administration’s policy of preventing pollution while also promoting economic growth, minimizing regulatory uncertainty, and showing due regard for the roles of Congress and the States under the Constitution. 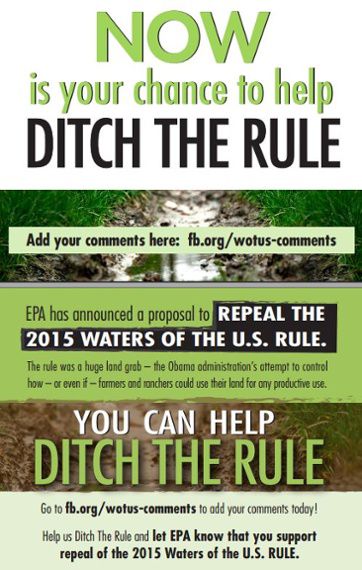 Then this June, EPA and the U.S. Army Corps of Engineers took the first in a two-step process to carry out this Order.

In this first step, the proposed rule would repeal the 2015 WOTUS rule and restore the previous regulatory text that was in place prior to that rule.

The second step will be the proposal of a new definition of "waters of the United States" based on the current Administration’s policy determinations. This will happen later, and there will be another call for public comment at that time as well.

While the EPA docket is not officially open to accept comments, the Farm Bureau Advocacy site, put together by American Farm Bureau, can hold comments in escrow until the docket opens. Arizona Farm Bureau farm and ranch leaders are encouraged to voice their own comments and experiences as to why the 2015 WOTUS rule must be repealed. The process takes just minutes and the page even gives instructions.