The 5 Most Unique Things About Arizona Farming

Our agriculture base in Arizona is truly unique. If you talk to anybody about Arizona farming they’ll begin the discussion by talking about our water and land. After the completion of the 2007 Census of Agriculture (the most recent Census available), Steven Manheimer, Arizona State Director for USDA-National Agricultural Statistics Service, said, “Like several other western states, Arizona agriculture benefits from large irrigation projects and vast acreages of Federal and State lands where livestock grazing is allowed as a primary use.” 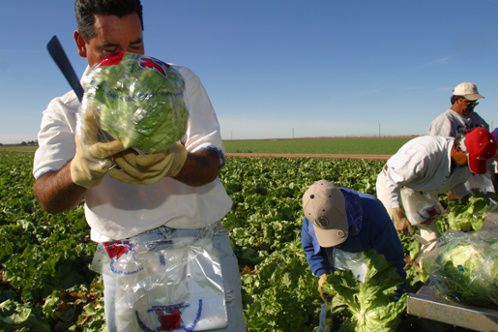 This recognition of the value of our resources helps contribute to the uniqueness of Arizona farming.

Manheimer further stated, “In addition, our weather plays an important role in allowing Arizona to supply the nation with winter vegetables otherwise unavailable in most areas of the country. The huge difference between agriculture on reservations and agriculture outside reservation boundaries also plays a role in making it difficult to generalize about Arizona agriculture.”

Emerging trends in Arizona farming include direct market activities and organic agriculture statewide in Arizona. Between 2002 and 2007, sales of agricultural commodities sold directly to consumers increased by 34 percent to $5.3 million. Sales of organic production exploded from a meager $3.4 million in 2002 to $48.4 million in 2007 and the number of growers of organic production nearly doubled. However, when you look at total sales of all agricultural commodities which totaled more than $3.2 billion, these two segments of agriculture, although growing rapidly, are still fairly small compared to the size of traditional agriculture.

The 2007 Census of Agriculture also focused on trying to include tribal farms that historically have been undercounted or have been very difficult to count. During the unveiling of the 2007 Census of Agriculture results in Washington, Agriculture Secretary Tom Vilsack commended NASS’s minority outreach efforts, in the addition of more than 30,000 minority and limited resource farmers to the census mailing list. These extra efforts were especially noticeable in Arizona, a state with the highest number of American Indian farmers in the United States. From that it was discovered that the total number of American Indian farms in Arizona is nearly 8,500. These tribal farms cover almost 21 million acres of land, which is nearly 80 percent of all land in farms for Arizona.

The increase was mainly caused by a procedural change, which altered the way the reservation operations were counted in 2007. Prior to 2007, American Indian farms and ranches were undercounted because each reservation was counted as one large farm. This undercount needed to be corrected because the size and scope of American Indian farming and ranching not accurately measured. While a majority of these tribal farms are small and focused on growing for the family, by going out and actually surveying individual American Indian farm operators, the counts were significantly higher. Counties like Apache, Navajo, Coconino, Mohave and Gila counties had significant shifts in many items due to the inclusion of individual American Indian farmers and ranchers. In addition, statewide counts for the number of farms by size look very different compared to 2002 due to this procedural change.

If you take a closer look at reservation farming, you will notice that there are significant numbers of women farmers. Because of our special outreach efforts, we were able to count more American Indian female farmers, causing a large increase in the overall number of women farmers throughout Arizona. The number of farms operated by women grew by almost 400 percent since the previous census. In 2007, there were over 6,000 farms where women were the primary operator, compared to just over 1,500 in 2002. Overall, there were more than 11,000 female farm operators in 2007. Nearly 7,000 of these operators are newly recorded female American Indian farmers.

Thanks to the 2007 Census of Agriculture, we were also reminded that we do produce in Arizona really well. According to the results, Arizona continues to be one of the major agricultural states, ranking third in the nation for total value of vegetables, melons and potatoes produced and second in U.S. lettuce production. With broccoli, for example, 90% of the broccoli Americans eat comes mostly from California and Arizona. And when it comes to lettuce, the one place producing the majority of it in the winter Yuma, Arizona otherwise known as America’s Winter Salad Bowl.

Agriculture: Small, medium, large, we need it all. And in Arizona, we have it all!

Quality, available and nutritious food has become more and more important to Americans and the world. Arizona is well respected in its quality agriculture production throughout the year. And, besides our state’s farmers and ranchers, Arizona families are becoming a big part of what makes Arizona agriculture and specifically Arizona Farm Bureau, so special.

Arizona farmers and ranchers eagerly await the next Census of Agriculture which will be available in 2014.