The Rancher and the Tortoise

By William “Bill” Dunn, An Arizona rancher: Have our worst fears come true in Arizona’s desert rangelands?  Will one critter finally be the end of the livestock grazing industry because of an agreement between Western Watersheds, Wildearth Guardians and the U.S. Fish and Wildlife Service (FWS)? That was certainly the intent of the agreement on the litigant’s part. 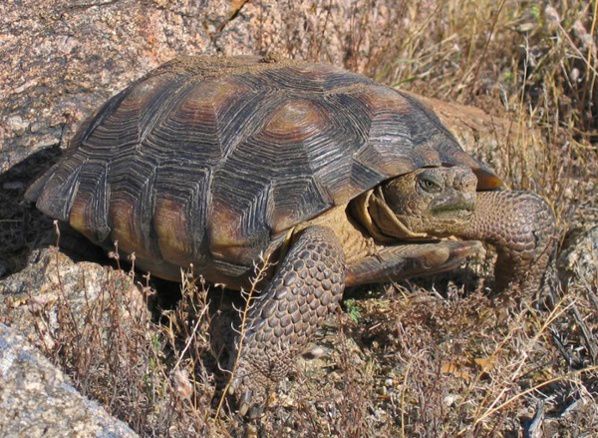 The Sonoran Desert Tortoise was seen as the tool to do just that. Their petition to the FWS in 2008 was aimed directly at the livestock grazing industry. It was the same strategy they used in the Mojave Desert Tortoise in Southern California, Southern and Southwestern Utah. In that they were successful in eliminating the grazing industry, to be replaced by a ; that of studying the tortoise.

When they got wind of the petition and understood what the ramifications were, the board of the Winkelman NRCD commenced coordination meetings with FWS. Luckily, they had in their district a tortoise study that had been going on for nearly 30 years; longer than any other. The Meyer family had been actively studying all aspects of the tortoise on theirs and their neighboring ranches with the help of the University of Arizona where Dr. Walt Meyer was teaching at the time. Using knowledge from that study and with the help of U. of A. Cooperative Extension Economics Department, and Mary Darling, wildlife biologist and longtime tortoise expert they confronted the FWS with enough information to help them to determine that indeed livestock grazing was not a threat to the tortoise.

Then in 2012, FWS and those same litigants agreed, and a judge concurred, that the FWS would go back through their list of 251 threatened species and determine whether they should be listed as endangered or removed from the list altogether. The Sonoran Desert Tortoise is on that list and will be determined by September 30th this year. For the last three years, the Winkelman NRCD, the Arizona Association of NRCDs, BLM, NRCS, FWS have been meeting and developing a Best Management Practices (BMP) document to be ready for the FWS to use when they got to this point.

Here’s the point: in order for the livestock industry in Arizona to convince the FWS that they are doing enough to protect the tortoise without federal coercion, the BMPs need to be adopted and used by the livestock industry here. Producers will have to be trained in these BMPs and annually report on whether they have had occasion to use them or not and how they used them. These are not difficult or costly practices, mostly just common sense stuff you need to do when you are doing your everyday duties as a rancher.

So, if you are ready to help yourself, and at the same time help the tortoise, you are going to need to participate in upcoming soon. The Winkelman District and the State Association will be holding these around the state in the coming months so be ready to participate. You may have to postpone moving cows or putting out salt for one but decide now what is more important to your future as a rancher in Arizona’s deserts. This is a proactive approach to the endless petitions to list species. It’s the way the ranchers up north and east are approaching the Sage Grouse, Prairie Chicken, Dunes Lizard.

This time it’s voluntary. If you don’t do this and it’s listed, it won’t be.