By Julie Murphree, Arizona Farm Bureau: Arizona agriculture’s impact on the state’s economy now stands at $12.4 billion. This has been done through innovation, increased productivity and diversity.  And, this is a reflection of agriculture production across the United States. 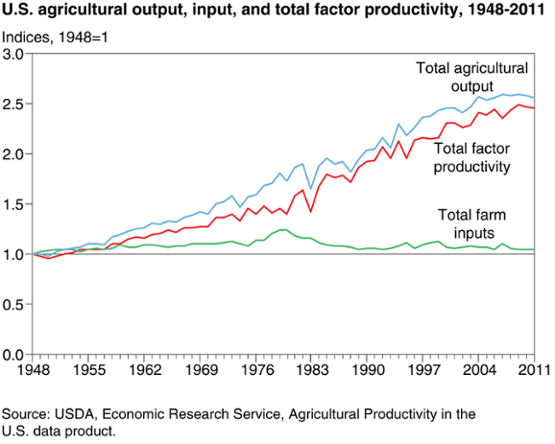 According to the United States Department of Agriculture (USDA), technological developments in agriculture have been particularly influential in driving change in the farm sector. Advances in mechanization and the increasing availability of chemical inputs led to ever-increasing economies of scale that spurred rapid growth in the size of the farms responsible for most agricultural production. As a result, even as the amount of land and labor inputs used in farming declined, total farm output more than doubled between 1978 and 2011.

To bring home the reality of American and Arizona farmers and ranchers productivity gains, in 1940 one farmer could feed 19 people. Today one farmer on average can feed 155 people. And, we’re doing this with fewer farm inputs (labor, land, fertilizer and more).

“Our farm community at all levels possesses a high interest in learning the facts about the farming operation. They’re highly educated in the science of farming,” says Eric Wilkey, president of Arizona Grain, adding his theories to Arizona agriculture productivity output. “Plus, the cost of water has pushed our farmers to be really innovative in productivity gains to offset those water costs. Other input costs drive this too and will drive innovation wherever in the country someone farms. But some of our unique costs to farming here are really driving innovation.”

Our productivity numbers (assessed by our land-grant university, the University of Arizona and Arizona economists) reveal a continuing higher economic contribution to the state. For instance, the total economic impact in terms of output was $6.6 billion in 2002 to $9.2 billion in 2004 and has now reached $12.4 billion.

“Agriculture sets the table, but doesn’t get to sit at the table unless it quantifies itself,” says Arizona Farm Bureau’s Government Relations Director Joe Sigg. “These periodic economic updates sourced objectively from a credible third party are important.”