By Julie Murphree, Arizona Farm Bureau: “When I grew up, it was silly to think that a person would want to go into the agriculture field and I remember taking one of those aptitude tests designed to help a person figure out what careers to pursue,” remembers Janna Anderson, Arizona Farm Bureau member and West Valley organic farmer who began in agriculture in 2000. “I laughed at one of the choices and remember saying “Farmer?! Who wants to grow up to be a farmer? That shouldn't even be an option. I'm going into nursing where I can make a real living.” 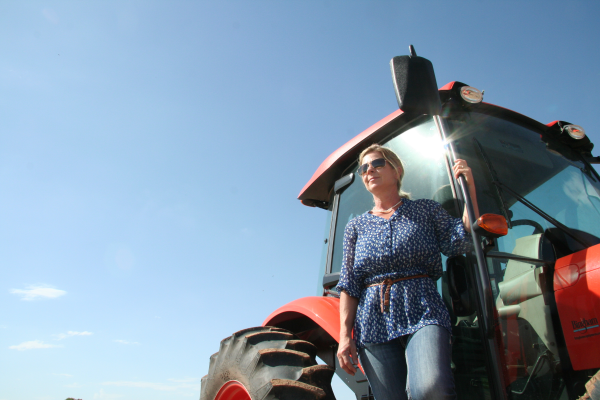 Arizona Farm Bureau member and "beginner" farmer Janna Anderson was inspired to get into farming because of a niche market she felt was lacking available farmers.

She continues. “Quite a few years later, I was one semester short of becoming a registered nurse when I saw a need in the community farmers’ markets that I was able to fulfill and worked toward that goal until I realized this was something that could be a real career. It’s a very funny story to me now when I look back and realize the aptitude test had it right all along. I sincerely enjoy learning to grow new things and it didn't hurt when I enjoyed a kind of rock star admiration from people who would buy my produce.”

Her story isn’t unusual, may even be typical for the “beginner farmer” as the USDA calls them, but undoubtedly inspiring to those wanting to enter farming, certainly women.

And, surprise surprise … women in Arizona are playing a dominant role. Well, we really shouldn’t be surprised.

The story on women’s engagement in Arizona agriculture was recently highlighted on KJZZ by reporter Mark Brodie in a feature called, “Number of Female Farmers In Arizona Among Highest In The Country.”

While the KJZZ piece did not go into specifics as to USDA Census of Agriculture numbers, there is a unique story that Arizona agriculture tells in the numbers. A quick analysis of the data highlights what we’re talking about.

Here are some quick points from USDA's Census of Agriculture, Arizona statistics:

***      Mohave, Pima and Yavapai counties are further down in the rankings for the number of women operators, but still 30%, 36% and 28% of all farms in those , respectively, have Women as Principal Operators.

***        28% of the farms with Women as principal operators are aquaculture or other types of animal farms (horses, alpacas, llamas, deer, elk rabbits, etc)

While this breakout of numbers distinguish which farms are coming from tribal lands, it’s easy to see what one might call the Native American effect. In some tribes, the matriarchal culture clearly identifies women as primary owners of a self-sustaining or subsistence farm and this would be heavily weighted in the where tribal lands exist, as certain represent broad tracts of tribal lands.

It’s a unique aspect and special consideration to our agriculture heritage in this state. The above numbers do not give us any indication of the beginner farmer trend highlighted by women farmers like Janna Anderson. Though anecdotally we can speculate that more and more women continue to be interested in agriculture.

American Farm Bureau is taking a serious look at this demographic with the recent announcement of the Women in Ag Survey: Gauging the Aspirations and Needs of Women in Agriculture they recently launched. The “Women in Ag” online survey aims to gauge the goals, aspirations, and needs of women in American agriculture in a number of different areas.

All women who are farmers, ranchers, farm/ranch employees, employed in agricultural businesses, pursuing ag-related higher education or supportive of agriculture in other ways are invited to participate in the survey at womeninag.fb.org.  Respondents must reside in the United States. Farm Bureau membership is not required to participate.

“This comprehensive survey is the first of its kind to ask women in-depth questions about how they are connected to agriculture and what leadership skills they think are most important today, as well as the top business challenges they’re facing,” said Terry Gilbert, a Kentucky farmer and chair of the American Farm Bureau Women’s Leadership Committee.  “All women involved in agriculture – not just Farm Bureau members – are invited to participate in the survey,” Gilbert emphasized.

Data collected from respondents will be used to gauge trends related to the achievements of women in agriculture, including leadership positions, business successes and election to public office.

The AFB Women’s Leadership Committee is sponsoring the survey and is working with other farm and agriculture organizations to encourage participation. Participants will be eligible for an opportunity to win one of five $100 gift cards after the survey closes. Preliminary findings from the survey will be released in February 2015 at AFBF’s FUSION Conference in Nashville, Tennessee; the full report will be released in late spring.

Janna Anderson’s full story can be found in the November/December issue of Arizona Agriculture in the article titled, “A Conversation with a Beginner Farmer: Janna Anderson.”