By Julie Murphree, Arizona Farm Bureau: The United States Department of Agriculture (USDA) just released its 2015 Agriculture trade forecasts. Fiscal 2015 agricultural exports are forecast at $143.5 billion, $9 billion below fiscal 2014 and down $1 billion from the August forecast for fiscal 2015, according to the latest electronic Outlook Report from the Agriculture Department’s Economic Research Service and Foreign Agricultural Service. 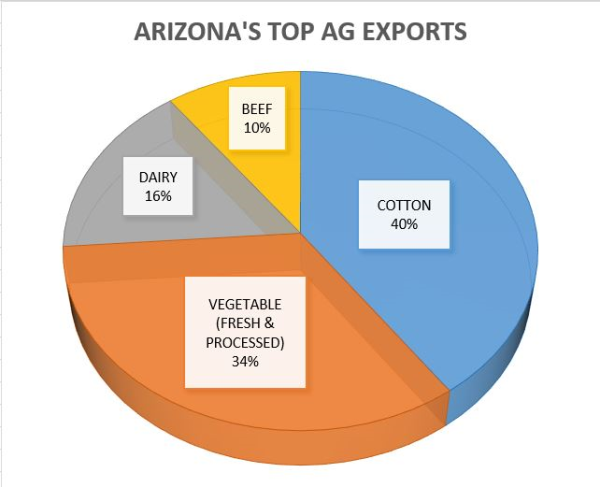 Even despite our trade surplus forecast number being down, we can still claim that U.S. agriculture continues to be a net exporter, unlike other industries that must deal with a trade deficit.

So, Curious how Arizona contributes to our trade?

What do we export?

*USDA: (Can include other animal & poultry products, other grains and oilseeds, wine, beer, other beverages, coffee, chocolate, other horticulture products and prepared foods)

Our Top 4 Products Exported from Arizona, 2012

Despite the fact that year after year, Arizona agriculture has reduced the number of acres in cotton production, cotton remains the leading agriculture product this state exports. The main reason is nearly all of our cotton is exported.

Arizona Agriculture's top 4 exports. Data is from the USDA, 2012 figures are the most recent that available.

“We have an amazing cotton industry in Arizona,” says Arizona Farm Bureau President Kevin Rogers who grows cotton in Maricopa County. “We’re recognized, along with California, as having some of the best quality and highest yielding cotton in the country. So, it’s no surprise to me that cotton ranks at the top in our agriculture exports from this state and that it represents a global demand for such a high quality and versatile fiber.”

It’s one of the reasons that cotton is a crop worthy of such recognition as being identified in our state as one of the 5 “Cs” of Arizona. In total value to the state beyond export value, the cotton industry generates more than $500 million to our state.

"All this adds up to the $17.1 billion annual return to the state," adds Rogers.