By Julie Murphree, Arizona Farm Bureau: Julie Borlaug is the granddaughter of Dr. Norman E. Borlaug and the Associate Director of External Relations at the Borlaug Institute for International Agriculture at Texas A&M. Since the passing of her grandfather, Julie has worked to continue his legacy through developing agricultural partnerships between public, private and philanthropic groups to further the Borlaug legacy and expand upon his mission to feed the world’s hungry.

Norman Ernest Borlaug (March 25, 1914 – September 12, 2009) was a famous American plant biologist, humanitarian and Nobel laureate who has been called "the father of the Green Revolution,” “agriculture's greatest spokesperson” and “The Man Who Saved A Billion Lives.” He is one of seven people to have won the Nobel Peace Prize, the Presidential Medal of Freedom and the Congressional Gold Medal and was also awarded the Padma Vibhushan, India's civilian honor.

Borlaug received his B.S. in Biology 1937 and Ph.D. in plant pathology and genetics from the University of Minnesota in 1942. He took up an agricultural research position in Mexico, where he developed semi-dwarf, high-yield, disease-resistant wheat varieties. 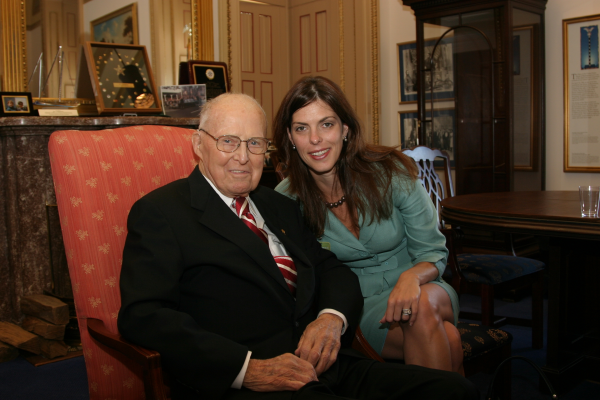 Norman Borlaug with his granddaughter, Julie.

Arizona Agriculture recently interviewed Dr. Borlaug’s granddaughter, Julie, for the August 2014 issue of the magazine. Agriculture members of Arizona Farm Bureau will be able to read the entire interview in the coming issue. In the meantime, we share two of the questions we asked her here.

Arizona Agriculture: When did you realize your grandfather was someone special?

Borlaug: In third I had a reading comprehension assignment, little stories you would read and then answer the questions on the back of the paper. One of them was my grandfather. And, I thought, “Oh my gosh II Daddy – what we called him – people know about him!” This was the first time I realized he was important. He didn’t talk a lot about what he did. We knew that he was helping feed people. But he didn’t draw us into his professional life on a daily basis partly because he was so often out of the country.

And then as I got older and became more aware of his fame, we would engage in conversations about what he was doing, his work and certain projects and that’s when I began to understand his influence. When I did get to travel with him it was always amazing. When I was in Africa last week people often would come up and say, “I met your grandfather when I was a I met your grandfather when I was a student at whatever university.” They told me Grandfather would sit down with them and listen and gave great . They’d even tell me that it was why they were doing what they are doing today.

I think that’s when I really realized his influence; hearing their personal stories of what his impact was and how many people he did touch.

By the way, I took him to Show and Tell after I had that third-grade reading assignment and he brought the Nobel Peace Prize with him and all the kids thought that was great. But, up next was a hamster, so he got upstaged by a hamster. He thought it was pretty funny.

Plus, all of us were athletes influenced by grandfather’s own wrestling career. He was a high school wrestler in Iowa. He also went on to wrestle for Minnesota. He believed what he learned from athletics about fighting and never giving up; plus the combination of respecting others and having a competitive spirit; he put that into his work ethic and believed that was really important for all children to learn. He believed you could translate that into your adult life. As a result, of us was an athlete. he’d call one of us he’d ask, “How is school and what sport are you playing?”

My grandfather started Little League in Mexico so that my Uncle would be able to play baseball. My grandfather’s real dream was to be a for the Chicago Cubs.

Arizona Agriculture: Are you hopeful about the future? Explain.

Borlaug: I am hopeful because my grandfather was always optimistic. He’d always say you’re not going to achieve anything with . I think we’ll get over the backlash on innovation and agriculture modernization.

In fact, I kind of look on the entire GMO debate as the anti-vaccination debate. In ten years we’re going to look back and wonder why we wasted our time on this. So I am hopeful.

Plus, with nutrition people are realizing that health issues all start with food. I am positive.

We’re seeing positive movement in Africa. I just had a conversation with someone that suggested that Africa is a mess. I reminded this person that most of that continent’s countries have only been independent since the 1960s. Where was the United States in that short amount of time when we first became an independent nation? We need to give this amazing continent time to progress. We’re asking them to take our 200+plus year history and jump to where we are now.

Development support in the 1970s and 80s was kind of a shotgun approach. Everyone was out there trying to help developing countries but no one had a real coordinated approach. I think the Gates Foundation has put metrics to it along with core strategies to eradicate world hunger. It’s not too bold of a statement for Melinda Gates to suggest that we can eradicate global hunger in our lifetimes. I’m we now have a more cohesive approach where we’re all working toward some clear and stated goals and doing it together.

The Gates Foundation came out in support of Golden rice and they are funding the Borlaug Wheat Rust on UG99, 90 percent of wheat around the world is susceptible to wheat rust.

Editor's Note: Want to read this entire article in the August 2014 issue of Arizona Agriculture but are not a member of Arizona Farm Bureau? Become a member to receive the magazine, one of your member benefits (for agriculture members only)!