By Julie Murphree, Arizona Farm Bureau: Jamie Johansson grows olives in Oroville, California and operates an olive oil company, Lodestar Farms. At first blush, you’d not pick him as the first one to advocate for biotech (genetically modified) crops

Johansson Lodestar California Olive Oil farm has provided olives for 15 award-winning olive oils, including one Best of Show, at the prestigious Los Angeles County Fair's "Oils Of The World Competition." Johansson is quick to point out, “Though it was not the ‘Lodestar name on those bottles, having your peers within an industry look to your farm for quality has its own satisfying prestige.” He started as a behind the scenes farmer providing the olives and olive oil for 10 other California olive oil companies from Santa Barbara to Mendocino. 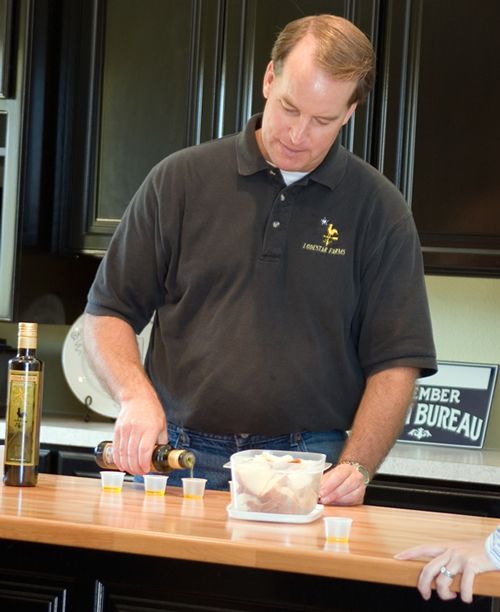 So, knowing his direct contact with customers, one might not think Johansson is an advocate for GMOs. But he’s been in the fight for more than 10 years. A 2004 quote in Western Farm Press regarding the county battle with GMO activists trying to ban the farming of biotech crops gives us a clue.  "This whole thing is very serious. It is a political power play by someone who wants to control America’s food supply like a third-world dictator.”  He spearheaded the effort to defeat the anti-GMO initiative in Butte County in California.

He added, “The anti-biotech radicals cloak their campaign against such things as insect-resistant and herbicide-resistant crops by saying biotech crops will harm organic crops.”

“There is no threat to organic farming that is a red herring,” said Johansson. “I have friends who are organic olive oil producers and they are opposed to this. However, they are caught in a Catch 22 situation if they come out in opposition. They are afraid.”

A first generation farmer beginning in 1993, Johansson is not afraid to wade into this situation. Married with three kids, ages 6, 3 and 2, he explains why. “This is one more tool we need in the toolbox. I want to know that my if they decide to farm, have options that allow them to improve their farming practices.”

Arizona Agriculture: What do you predict will happen with these “Right to Know” efforts? You might be familiar with the official launch of the Coalition for Safe, Affordable Food.  The Coalition is dedicated to providing , media, consumers and all stakeholders with the facts about ingredients grown through GM technology.  The immediate goal of the new coalition is to advocate for a federal solution that would establish standards for the safety and labeling of food and beverage products made with genetically modified ingredients (GMOs). Do you think they’re approaching this correctly?

Johansson: Certainly there needs to be a national discussion on this topic and I would look forward to that discussion. Having the right discussion would serve to help justify what we’re doing on the farm, to make our environment better and to make our community better. When we begin the discussion on the use of GMOs and the safety of the technology it will strengthen the argument that there really isn’t a need for labeling but that we could have a repository full of information for the consumer to go to and understand why that technology is used.

My real hope is that the discussion is focused the two groups that have been separated for so long: the farmers and consumers. What happens with biotechnology serves two groups more effectively than anyone else, the farmer and the consumer. Those are the two groups that really have to have a strong presence at the table whatever the national discussion is. I hope they are the two loudest voices there. What exactly do you want to know as a consumer and what is the best way for me as a farmer to get the consumer that   When those two groups are satisfied everyone in the middle will be satisfied.

Editor's Note: For our Arizona Farm Bureau agriculture members, watch for the remaining conversation with Jamie Johansson in the April 2014 issue of Arizona Agriculture.