By Steven Manheimer, Arizona State Director for the USDA-NASS and Alex Minchenkov, Public Affairs Specialist for USDA-NASS: According to the 2007 United States Department of Agriculture (USDA) Census of Agriculture (latest available), reservation agriculture is a significant part of the size and scope of Arizona agriculture. 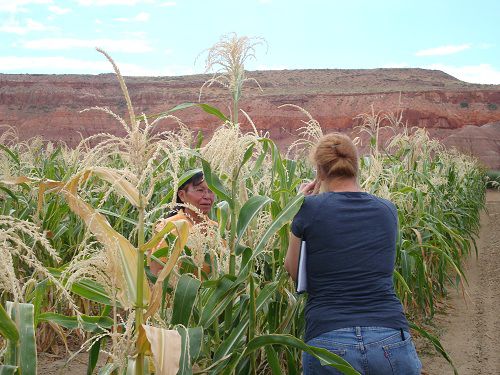 Arizona is the only state in the nation in which more than half of all farmers and ranchers are American Indians. The majority of Arizona’s sheep, goats and horses are raised on American Indian farms and ranches. In fact, nearly 21 million farm acres in Arizona are tended to by producers on the state’s twenty American Indian tribes and nations. This accounts for nearly 80 percent of all land in farms in Arizona.

In 2007, these farms also sold close to $85 million worth of agricultural products. And while that $85 million represents no more than 3% of Arizona’s total of $3.2 billion agriculture commodities sold, this figure averages approximately $10,000 per American Indian farm in Arizona.

While the next Census of Agriculture (due out sometime next year) will reflect new numbers, what we know now is that tribal lands contribute to the overall Arizona agriculture industry.

Through the 2002 census, reservations were counted as a single farm, while individual producers within the boundaries of the reservation were not counted. This caused major underrepresentation of American Indian agriculture in the United States. To correct this undercounting for the 2007 census, the National Agricultural Statistics Service (NASS) worked with other USDA agencies and several national American Indian groups to change the census data collection process.

In conducting the 2007 Census of Agriculture, NASS placed a special emphasis on the outreach to the American Indian farmers and ranchers. NASS engaged each tribe or nation in the United States to help build lists of American Indian producers and allow NASS to collect census data from individual producers. A large number of tribes and nations agreed to participate and for the first time, American Indian agriculture in Arizona the same way as agriculture outside boundaries.

Another major trend that emerged was in livestock production. In 2002, only 6 percent of all farms in Arizona raised sheep and 7 percent raised goats. However, American Indian farms were much more likely to raise livestock and according to the 2007 Census, the percentage of farms raising sheep and goats jumped to 32 and 22 percent, respectively.

Reservation agriculture in Arizona is not one size fits all. There are several reservations where tribes lease most of their agricultural lands to non-Indian farmers. There also may be some tribal members who grow small acreages of crops or raise small herds of livestock but the majority of agricultural activity on these reservations comes from the leasing situations. The Cocopah and Fort Yuma reservations in the Yuma area are typical examples and the Salt River Pima Maricopa tribe is an example from central Arizona.

Tribes that have large commercial tribal farms or ranches are another type of reservation agriculture. These reservations may also lease lands to farmers or ranchers. Examples of this type of reservation agriculture are the Fort Mohave Tribe and Colorado River Indian Tribe in western Arizona and the Gila River, Ak Chin and Fort McDowell tribes in central Arizona. There are numerous other tribes that also have this structure.

With more than 12,000 producers, the Navajo Nation is by far the largest reservation in the United States and it dominated the census statistics for American Indians. In addition to being the largest reservation in Arizona, the Navajo Nation also includes parts of New Mexico and and covers nearly 16 million acres, mostly permanent pasture for grazing.

Unlike the producers who farm off the reservations, Navajo Nation producers focus much more on sustenance than on commercial farming. Despite selling more than $61 million worth of agricultural products, 57 percent of the Navajo Nation farms reported total sales less than $1,000. In contrast, only 23 percent of farms off reservations had sales of less than $1,000 (See chart nearby).

The Future of Reservation Farming

One of the primary strengths of the Census of Agriculture is its ability to document trends in agriculture. There are several reservations in Arizona that already lease large acreages of reservation cropland to commercial producers operating outside reservation boundaries. Will this continue to increase in the years to come?  What is the capacity for tribes to increase their cropland base?  What types of commodities will be grown on reservation acres?  All these types of questions can be answered starting with the 2012 census, so trends should start to emerge.

The 2007 Census included the most accurate and complete accounting of reservation agriculture. The 2007 numbers will form a benchmark to measure changes in how those acres are utilized in the future. For some tribes, opportunities to grow their agricultural base certainly exist.

Further, the USDA and others are working to support efforts to help the next generation of farmers. As the USDA points out, "farmers in rural America represent less than 1% of the U.S. population, yet they produce almost 75% of the food we eat in this country and much of the food eaten throughout the world. Among that 1%, the average age of the American farmer is 57 years old." One model agriculture program is helping bring the next generation of farmers into a strong future of farming in America.

Additional information about agricultural activity on American Indian reservations is available in the , released by NASS in June 2009. Visit the NASS website at www.agcensus.usda.gov for more information.

Editor's Note: This article originally appeared in Arizona Farm Bureau's monthly Arizona Agriculture. We republish it here with a few updates. We'll cover this topic again when the new Census in Agriculture numbers come out.