By Julie Murphree, Arizona Farm Bureau: Arizona Farm Bureau members are award-winning winemakers! Yes, Arizona agriculture is diverse, successful and full of winners. This last weekend was confirmation of that truth at the annual Festival at the Farm wine event hosted by the Arizona Wine Growers Association. The event, sponsored by the Arizona Republic and judged by a variety of wine experts, brings out the best of Arizona’s wines. 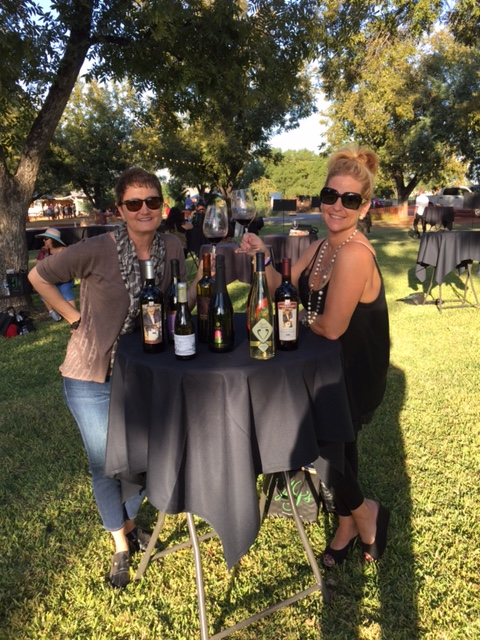 Farm Bureau member Diann Prechel (right) and I had a wonderful time November 15th sampling some of Arizona's finest wines. Several of our award-winning winemakers are members of Arizona Farm Bureau.

Attending with retired cotton farmer and current Farm Bureau member Diann Prechel, I met with several of our Farm Bureau members last Saturday who also happen to be some of the best in the state! We got to sample the variety of wines at the event too!

Jim and Ruth Graham of Cochise County and owners of Golden Rule Vineyards, current members and in previous county leadership roles for Cochise County Farm Bureau are a great example of some of the amazing winemaking going on in Arizona. Here their awards story for this latest competition:

Golden Rule Vineyards wants to share with you its success in the 2014 Arizona Republic and Arizona Wine Growers Association wine competition.

In October we entered eight of our recently released wines for judging against the best wines that our fellow Arizona wine producers make.  A total of 140 wines were submitted of which 114 received recognition.  Twenty judges rated the wines and were asked to identify their favorites among the entries.

If you would like to read the article regarding the competition you can search "Victorious Vino" at the Arizona Republic newspaper website.

Said Jim and Ruth Graham, “Having our Golden Rule Vineyards wines mentioned among the best wines in Arizona is a great honor for us.  We are extremely pleased to have this kind of recognition leading up to our Grand Opening of our tasting room at our farm.  We hope you can all come for a visit sometime soon and see for yourself if you agree with the judges.”