He's a man with a mission. And Dan Bell's recent picture in USA Today proves his continued quest to adequately secure our border. But while they only show his backside, we know all sides to the man (and share them here).

It’s not like it used to be. Not since the unsolved murder of a friend and fellow rancher, Rob Krentz, by suspected illegal border crossers in 2010.

Since then, Dan Bell, rancher and president of the ZZ Cattle Corporation of Nogales, Arizona, has tirelessly worked to push efforts to secure our southern border. His family has been working the same piece of along the southern Arizona border since 1938. The operation has expanded to approximately 70 sections with nearly 10 miles bordering Mexico. 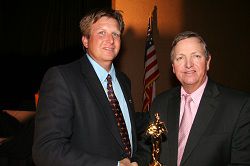 He knows those 10 miles and more of Arizona land that borders Mexico better than some people know their backyards. He knows the modern-day struggle of a people being exploited (Mexican nationals) and Americans seemingly being ignored by the challenges of living and working near an border.

This is part of why Dan is active. He is involved in the cattle industry and has served in leadership roles for the Southern Arizona Cattlemen’s Protective Association and the Arizona Cattle Growers’ Association, as well as serving on the Board of Directors for the National Cattlemen’s Beef Association. Dan also serves on the Board of Directors for the Pima County Farm Bureau, is a member of the Arizona Department of Agriculture’s Advisory Council, and was recently Chair of his local Natural Resource Conservation District.

Dan participates in the Border Patrols Citizens Advisory Board at the Nogales Station, as well as the Ranchers Liaison Group.

Two years ago, Dan hosted 42 staff from 23 state Farm Bureaus and American Farm Bureau. He arranged for the group to tour the Nogales Border Patrol station as well as see where the border fence ends on his property just west of Nogales. This year, Bell hosted a large group from Iowa to help them understand the situation on the border.

If you ever go on a border tour with Dan, the reality of the situation will come you straight, no sugar coating here. The end of the fence on his property is a cobbling together of multiple pieces of barbed wired, endlessly reattached where border crossers keep cutting it as they pass through.

To tell the story, Dan also worked with Phoenix media, especially television stations to show them the reality for border ranchers on several occasions. In addition to the Phoenix television stations, he has been interviewed by TV crews from across the United States and even a few European countries as well as radio stations.

He has given up countless hours and days to get the word so that we don’t have another tragedy like the murder of his friend.

Being selected by Arizona Farm Bureau as the 2011 Rancher of the Year is considered a tribute especially being honored among peers. But Dan is more reflective of what brought him this honor. “I really want to thank my family,” says Dan. “They’ve really given up a lot for me to be a spokesperson on the border issues. I really appreciate their support.”

Currently first Vice President for Arizona Cattle Growers' Association, Bell will take office as president of the Association this summer.