By Julie Murphree, Arizona Farm Bureau: Arizona cotton, wheat, and alfalfa farmer Clyde Sharp has been a tireless and highly effective advocate for the Arizona cotton industry for more than twenty years. In 1991, Sharp was elected to the Arizona Cotton Growers Association Board of Directors and began the slow process of becoming a leader on behalf of the industry. He observed in 1999 when the Arizona cotton producers rejected a Pink Bollworm Eradication Program. He had personal concerns with this knowing how devastating this pest is to the cotton plant. 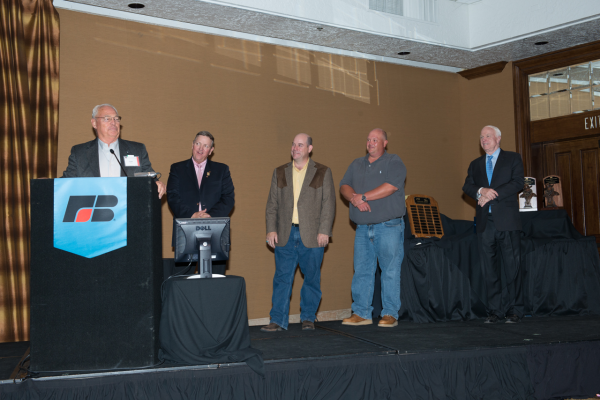 In 2003, Sharp was elected President of the Arizona Cotton Growers and determined that, notwithstanding a failed referendum in 1999, to try again. Many in the industry believed that the Arizona cotton producers had settled the issue of eradication. Sharp believed otherwise.

As a two-term member of the Arizona Cotton Research & Protection Council (ACRPC), he fought for improvements in plow-down regulations, targeted research funding and implementation of critical field programs conducted by the Council staff. Nowhere could his leadership be better demonstrated than through his shepherding of the highly successful Pink Bollworm Eradication Program from start to finish during his tenure as Chairman of the Council. Sharp led the industry team that conducted statewide grower educational meetings promoting the value and validity of the pink bollworm program. His unwavering assurances to cotton producers that the program could and would be carried out on time and on was not only accurate but essential to the success of the referendum enabling the program. He didn’t stop there. His leadership on the National Cotton Council Pink Bollworm Action Committee consistently helped move the program forward. Further, he created and led an Oversight Committee that regularly conferenced with all United States and Mexico Program Directors to address and solve issues related to program continuity at the field level. In essence, he stubbornly refused to let any obstacle come in the way of pink bollworm mission success.

The value of such pest control efforts might be lost on the uninitiated especially since the program and control of the pest not dependent on traditional insecticides. The Pink Bollworm Eradication technology used to eradicate the pink bollworm has four primary components: 1) extensive survey of fields to determine of the pest in a particular area; 2) transgenic Bt cotton; 3) pheromone application for mating disruption; and, 4) sterile pink bollworm moth releases. Program technologies are applied on an area-wide basis.

A real testimony to Sharp’s dedication to any and all novel approaches to benefit the Arizona cotton industry was demonstrated in his willingness to take a young scientist under his wing in the 1990’s. Sharp, and his brother, David, provided fields, and personal data gathering efforts to assist Dr. Peter Cotty as he developed his biocontrol technology for aflatoxin control. That technology adopted by the ACRPC is now rapidly expanding to benefit cotton, corn and numerous other agricultural crops nationwide.

Sharp’s determination and positive attitude when presented with difficult challenges cannot be overstated. His contributions to the Arizona cotton industry specifically, and to the agricultural community as a whole, is why Arizona Farm Bureau recognized Sharp as the 2014 Arizona Farmer of the Year.

“Clyde, like most cotton growers, is a gambler,” said Arizona Farm Bureau President Kevin Rogers. “But Clyde had to really test the limits, if not the patience, of his own colleagues and the industry to get this pest issue resolved. We’re proud of the work he’s done on behalf of the industry. ”