His parents, Dean and Rayanne Leister of Buckeye, inspired Brandon’s love of agriculture, including his grandparents. 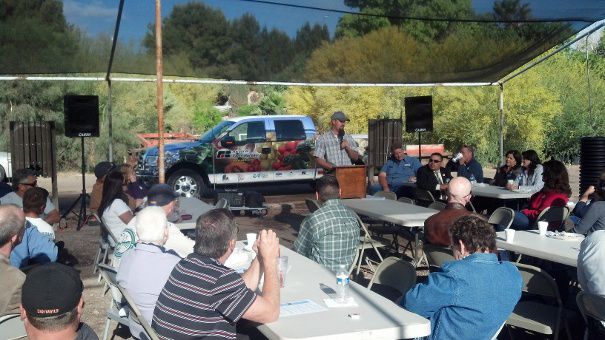 Leister was State FFA president in 1999-2000. His undergraduate degree is from Arizona’s land-grant university, the University of Arizona, and he became an Ag science teacher/FFA Advisor at Buckeye Union High School. Later, he went off to Texas for his master’s degree. Once he came home, he started farming. Married and father of a newborn daughter, Leister is also the president of the Buckeye Local Farm Bureau and member of the Board of Directors for Maricopa County Farm Bureau

Leister’s points about Arizona agriculture and farming in general, along with Dairyman Boyle, retail farmers Mark Freeman and Rick Evens highlight the great diversity and importance of this great industry.

For nearly 25 years, Maricopa County has hosted the Farm-City breakfasts. These breakfasts are designed to invite community leaders from the political, educational and civic arena to connect with Maricopa County’s farmers and ranchers.

While many would contend we have too many meetings, everyone looks forward to this spring series of Farm-City breakfasts in Maricopa County. It’s a chance to understand this state’s agriculture and connect with those committed to bettering our state and certainly our .

Thank for your commitment to agriculture in Arizona!