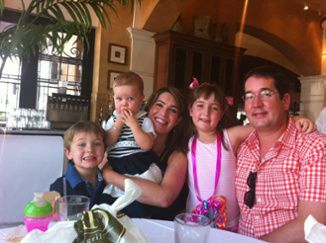 But what’s this connection between agriculture and Farm Bureau leadership involvement? Without serious study on the much can just be speculative at this point. However, if you go down the board of directors roster of Arizona’s 13 active Farm Bureau counties, all show farm families running at least two generations, if not four, five or six generations.

The Boyle Family is multi-generational in the dairy business here in Arizona.

This is not exclusive to Maricopa County. As mentioned earlier, Arizona’s 12 other active Farm Bureaus all have this much or more generational depth in their leadership.

Just recently one of my county farm bureau leaders told me he considers his Farm Bureau volunteer leadership a “calling.”  Farmers and ranchers are called to industry leadership.

The world’s population is currently around 7 billion. The United Nations (UN) predicts that by the year 2050 the world’s population will increase to 9 billion, increasing the demand for food by 72%. This is a staggering number when you think that a mere 2% of the population in America feeds and clothes the rest of us.

Arizona’s Farmers and ranchers cannot be careless; they must be caretakers of the land. If not, the land will quit producing. Period.

These generational farm and ranch families we talk about use Best Management Practices (BMPs) to address water quality and quantity issues using things like conservation tillage, conservation or riparian buffers, and erosion and sediment control. Today, conservation techniques and equipment have advanced to the point that many farmers plant right in the midst of the last crop’s stubble. No-till techniques have allowed farmers to keep crop residues on the field to help preserve moisture and to protect the soil from wind erosion until the next crop can flourish and secure the soil. In fact, no-till and conservation tilling techniques have increased substantially in recent years. In 1982 only 17% of acreage used these methods. Today, 63% of is under conservation tillage.

Rotational grazing is another way that farmers and ranchers can assure that they will be able to use the same land for the next generation to produce food and fiber for generations to come. Rotational grazing, or strategically moving livestock to fresh fields and pastures, allows vegetation in previously grazed pastures to regenerate. Benefits of rotational grazing include increased of plant and animal species, control of invasive plant species, habitat restoration for threatened endangered species, controlling erosion from water runoff for improved water quality, improving vegetation along stream banks and watershed health, reducing wildfire threat from rangeland fires, all while providing food for consumers.

A Few Everyday Steward Facts of Arizona Agriculture, and American Agriculture in general:

If Arizona’s agriculture was not sustainable, the farms and ranches would have disappeared after the first generation. So here’s to traditions, and the carrying on of a great industry – agriculture!

Hear a brief audio version of Arizona Agriculture's Generational Farming from October 5 (2013) Rosie on the House show on KTAR (Segment 3, starts midway into this segment)!