By Julie Murphree, Arizona Farm Bureau: Approximately 90 megawatts (MW) of power can be generated from Arizona manure; or power equivalent to running approximately 25,000 new energy efficient homes because of the estimated 165 concentrated animal feeding operations (CAFOs) in the state of Arizona, according to the APS Technology Development Department who conducted an assessment a few years back. Today, thanks to two of our dairies power to the grid from methane is now a reality. Triple G Dairy (the Gingg family) and Stotz Dairy (the Thompson family) have installed methane digesters that generate electricity on these two neighboring dairies west of Buckeye, turning what is considered a greenhouse gas into renewable energy that creates an income stream for the dairy operations.

Triple G Dairy was first to begin the process by covering the manure lagoons and capturing the methane from the lagoons. Stotz Dairy followed suit but was actually the first to begin generating electricity. 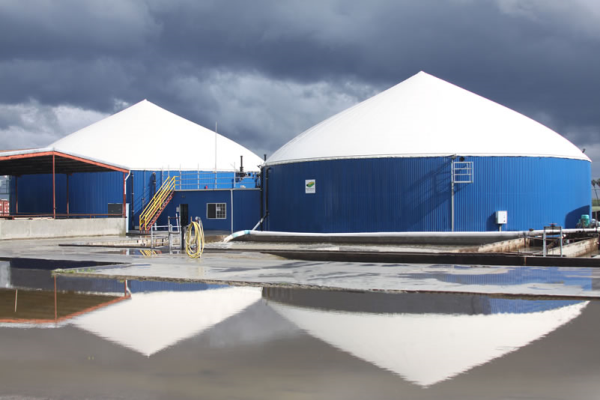 Arizona Milk Producers profiles Stotz Dairy in this video where the digester technology is referenced.

Both dairies worked with Environmental Capital Management (ECM) to make this renewable energy opportunity a reality. The company covered the lagoons, collected the methane gas and burned off the gas until the generator systems were installed. Now the methane gas is burned in engines to generate electricity. The company was required by the local electric utility to build a power line from the two generators to the nearest substation. ECM is working on a plan to wheel the electricity generated on the dairies to California, where it can be sold for a higher price than what can be obtained here under current rules.

Unlike solar or wind energy, the methane gas can be stored until there is a demand for the electricity it can generate. The company also earns carbon credits from this project, which is described as being just as valuable as the electricity generated.

This project was completed at no cost to either dairy, which was a remarkable benefit to both.

Ben Gingg, of the dairy in Buckeye, Arizona Farm Bureau member and board member with Farm Credit Services Southwest, is pleased with the outcome. “As energy costs have risen, a digester is a good proposition to produce energy than in the past. Additionally, the advent of green power credits from renewable projects is a must for this to work. It’s a for dairies. It’s a huge odor control for California that has a number of dairies in close proximity to urban development.”

Gingg’s 4,000-cow dairy operation in Buckeye is on 160 acres. They flush their cow lanes, use Saudi-style barn cooling and farm 4,000 acres for the dairies use. Motivated to pursue the digester option, Gingg is even more enthusiastic about this renewable energy opportunity than ever before. “Such technologies are our future.”

Depending on what type of technology an operation chooses, Gingg says it takes anywhere from $500 to $1000 per cow to build a digester and generator combination.

Methane digester from Fiscalini Farms in Modesto, California. California has several more examples of this on-farm renewable energy technology in action than Arizona in addition to discovering the added benefit of reducing manure odor from dairies and feedlots.

Overview of the Technology

The resulting biogas can be used to create:

Electricity from methane digesters on dairy farms can be used on site (thereby reducing the farmer’s energy costs, though in the case of Arizona’s two dairies using these systems all their power generated is being used off the farm), and the surplus can be sold to a public or private utility.

The biogas from methane digesters can be refined to produce vehicle fuel, known as bio-methane or “cow power.” Dairy digesters can also reduce the risk of excess manure nutrients polluting waterways, including groundwater.

There are more opportunities with renewable energy on the farm than just methane digesters. But for dairies, this technology is proving to be the most promising.

Arizona Farm Bureau is celebrating Gingg and Stotz Dairies’ innovation by recognizing them in November with the Environmental Stewardship Award. This award is given out annually to a farm and/or ranch showing innovation in conservation and environmental protection practices.