Julie Murphree, Arizona Farm Bureau Communications, Education, and Marketing Director: Longtime involvement in his local community and industry-related groups such as Farm Bureau, Arizona rancher Frank McNelly is focused on inspiring the next generation to take the leadership helm.

An interview with Frank McNelly, cattle rancher in northern Arizona.

Talk about your ranch: We’re in the beef cattle business; threegenerations now in Northern Arizona. We summer up here in Williams in the high country, and then we go out into the Cedar country in the winter time. We are a cow/calf operation with mostly Angus, but do have some Charolaise bulls. We have been saving our own heifers for replacements and do buy outside bulls.

What changes have you seen in your lifetime as it relates to ranching? I have seen the environmentalists really get a “Toe hold” and really put a monkey wrench in everything. Most of our land is Forest Service country. That’s been a big part of the changes I’ve seen in ranching here. The logging industry has left, leaving the woods overgrown. In fact, the Pinion Juniper is the biggest visual change I’ve seen. It’s taken over the grasslands. The environmentalists have blocked doing things with that issue. While native, the Pinion Juniper suck up the water and trees grow instead of grass.

When I was a kid there were just a handful of elk. Now they’re everywhere and taking over. The Game & Fish Department doesn’t seem to care. It’s a business for them. They’re growing their business too.

These are all some of the bigger changes I’ve seen.

Why did you choose to go into ranching? I grew up ranching, and really enjoyed it. I do have a college degree, I graduated from Northern Arizona University with a Degree in Business Administration in 1982. After graduating, I got a job offer to move to California to work for an insurance company, I thought about it for two seconds.

I just like working with the horses and cattle, it is just an enjoyable lifestyle. The people are great.

What generation of ranching are you? I am a third generation rancher. 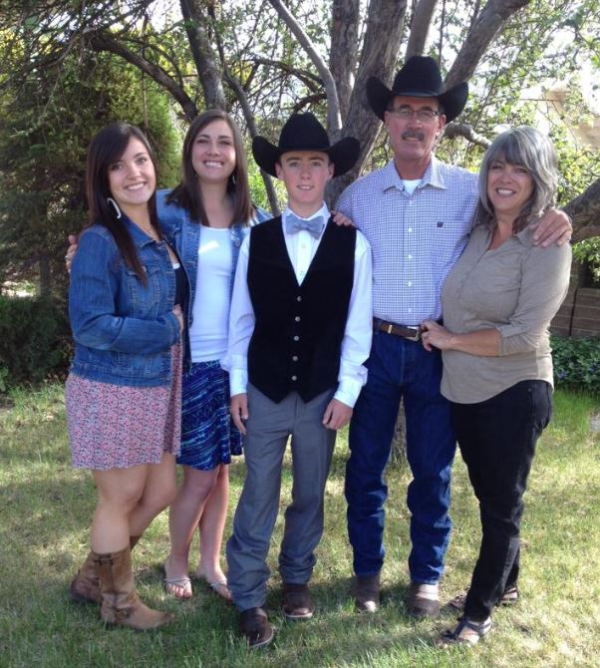 Joyce and Frank McNelly are raising their three children, Michael, Erin and Devin, to consider all their options for the future. They'll also be supportive if one of then wants to take the family ranching tradition into the next generation.

Will anyone in your family...younger generation...pursue ranching? I have three children, two daughters and one son. One daughter is graduated and working and the other one has a softball scholarship to college. I’m not really sure, but I think my son might be interested.

Would you ever consider growing other markets within ranching? You know, this country is pretty good, strong country, but its tough country. You can’t really deviate too much from the kind of cattle we have and how we market. In part because of where we’re ranching, the input cost is really the main factor influencing what we can and can’t do. Other costs like transportation must be factored into the equation.

What are your community activities? Why are you involved? I am on the county committee, the FSA committee for Coconino, Yavapai, and Mohave counties. I am on the City Council serving in Williams, as well as the NRCD board for fifteen years, planning and zoning commission too. I am also in leadership with Arizona Farm Bureau and Arizona Cattle Growers.

We were lamenting that it’s the same people doing the same things all the time in leadership roles. We want new blood. I may actually retire. It’s my mission to lean on some of our younger farmers and ranchers and attempt to inspire them to get involved.

What is one fact/experience/achievement no one knows about you? The first McNelly that came here was 13 years old. His dad was actually a scoundrel. They came by train, stopped here in Williams, and his dad left him. He got a job, stayed on and found some nice people and worked his way up.

I love to ski in the winter, as well as playing golf and roping.

What do you think you do really well? Explain. I have been told I can talk to people and relate to them without being pushy. And, they know I’m sincere. I’ll tell it like it is, whether you like it or not….since you asked, I’ll tell you.

Why are you a farm bureau member? The Farm Bureau is connected with the Cattle Growers here, and I think it is important because we have lobbyists watching out for us, and people are on the frontline to carry bills for us. Sometimes you just need some help, and that’s where the Farm Bureau comes in. It has been fun, and I have met some really nice people; I think has entirely helped my communication skills. Farm Bureau has also allowed me to make some great business contacts I would not have otherwise met. I’ve actually sold some cattle to people I’ve met through these organizations so it’s helped the business in more ways than one. It helps me work smarter.

How will the next generation of ranchers have to operate? Well, I think they are going to have to be more politically connected; they will have to be more in-tune with the economic side of things as they change. The one thing that never changes generation to generation is being out there with your cattle.

I just think the next generation really has to be more proactive in what they do and why they do it.