In 2017, 343 Arizona farms produced tree nuts on 21,724 acres; 13,537 acres were non-bearing for a total of 35,261 acres, according to the USDA Census of Agriculture, the most recent Census available. Between 2007 and 2017 the industry acreage more than doubled and more acres are expected. While we see growth in this Arizona agriculture commodity, the even bigger story is the economic contribution tree nuts make in our state and a recent study by Dari Duval, Ashley K. Bickel, George Frisvold, and Stephanie Perez with the Department of Agricultural & Resource Economics, University of Arizona Cooperative Extension fills in the entire picture on this story. 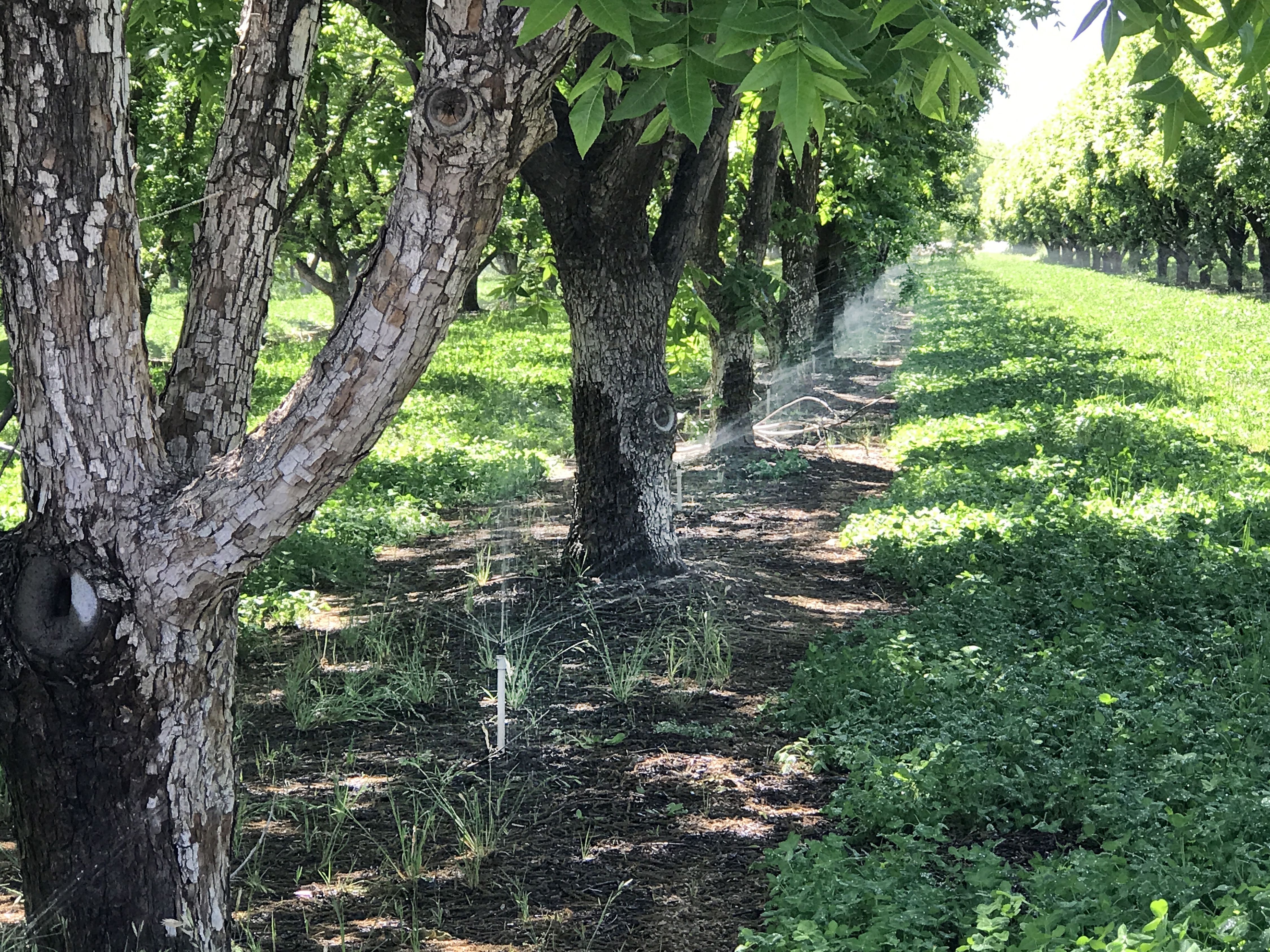 A pecan orchard in southern Arizona watered by a sprinkler system, UArizona’s new study measured water use in terms of dollar of sales per acre-foot of water, as opposed to acre-feet of water per acre, helping us to understand just how valuable our tree-nut crop is to Arizona’s overall economy.

In their study, “Arizona’s Tree Nut Industry and Its Contributions to the State Economy,” they report, “Arizona’s tree nut industry has experienced rapid growth in recent years. Arizona ranks among the top four states in its production of pecans and is one of only three states with commercial production of pistachios. Pecan and pistachio production in Arizona, combined, ranks within the state’s top ten agricultural commodities by cash receipts and state cash receipts for tree nuts are poised to increase in the coming years. Tree nut production contributes to local communities, supporting economic activity and jobs in businesses both directly and indirectly linked to tree nut production.”

The study’s executive summary further states, “challenges exist around sustainable withdrawal of water resources by a growing industry in groundwater-dependent areas and balancing the livelihoods of rural residents employed in agriculture and agriculture-linked industries with the availability and affordability of groundwater supplies relied upon by residents, agricultural users, and the environment.”

The report’s analysis covered the tree nut industry’s economic contribution to Arizona’s economy, including production, investment in new orchards, processing and other activities, and multiplier effects, and presented an overview of the industry, its trends, and water use for tree nut production in Arizona.

What the Study Found

The economic contribution of the tree nut industry in Arizona is not fully reflected in the industry’s cash receipts.  Because growers are investing in new, non-bearing acreage, grower expenditures on orchard establishment and maintenance stimulate additional economic activity within the state not reflected in cash receipts for tree nut commodities sold. In 2017, 38% of the state’s total tree nut acreage was non-bearing, 36% for pecans and 44% for pistachios. While this acreage does not generate revenues for producers, it does incur expenses, some of which are fulfilled through local businesses and labor force.

Results show that the tree nut industry’s total economic contribution was an estimated $113 million in gross state product and $190 million in sales in 2017, including multiplier effects. In total, industry production and investment supported 1,436 jobs, including on-farm jobs, farm proprietors, and jobs in industries supported through indirect and induced linkages. Total labor income supported, including employee compensation and business owner income, was $73 million.

Of course, everyone is regularly talking about the water issues in this state and Farm Bureau farm and ranch leadership is addressing ways to mitigate future water shortages. The UArizona economic team drilled down on specific water use in our tree nut industry.

One of the researchers and authors of the study, George Frisvold, pointed out that if you measure water use in terms of dollar of sales per acre-foot of water, as opposed to acre-feet of water per acre, it helps one understand just how valuable this crop is to Arizona’s overall economy.

The study’s water points are all below.

How the Study was Conducted