By Julie Murphree, Arizona Farm Bureau: Yes, we’re a desert state and landlocked and infrastructure for Inland Waterways might not seem like such an important issue for us. But when you look at this issue from agriculture’s perspective, it actually is very important. 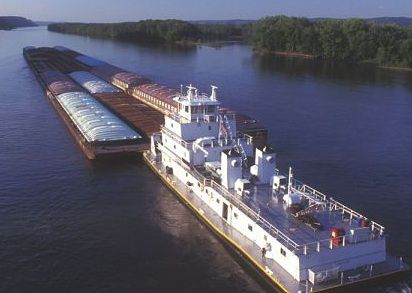 We’re moving tremendous amounts of agricultural commodities via our inland waterways. For example, more than 60% of America’s amber waves of grain are moving via these waterways. And, 95% of farm exports and imports move through U.S. harbors.

From Arizona’s perspective, it’s all about our cotton that is currently in the thick of harvest. Why so important? All of Arizona’s cotton is exported. “We move our goods out through Long Beach and Los Angeles Harbors,” says Ron Rayner of T Tumbling T Ranches, a cotton, wheat and alfalfa farmer in Arizona and California. “Virtually all of Arizona’s cotton is exported and dependent on healthy effective harbors and infrastructure that supports those harbors. Ships come in with 5,000 containers and in 24-hours must have it all unloaded. It’s an amazing feat of commerce.”

“Having an efficient and reliable inland waterway system linked to competitive ports is vital to America’s ability to provide affordable farm products domestically and to compete internationally,” noted AFBF President Bob Stallman in a statement. “New projects for flood protection, port improvements and upgrades to the nation’s aging locks and dams infrastructure authorized under WRRDA are long overdue.”

The House must now conference with the Senate, which passed its version of WRRDA legislation in May.

“AFBF now looks forward to with the Senate, which passed its version of WRRDA legislation in May, and finally getting a bill to the President to sign,” added Stallman.

“As a country that plays a major role in feeding the world, it’s vital that our farmers be able to transport our goods to domestic and international markets,” said Arizona Farm Bureau President Kevin Rogers. “By Congress passing this legislation and eventually getting it to the President’s desk, all of us in agriculture will be able to have our waterways updated and secure our river system for the for seeable future. This is a win for all of U.S. Agriculture.”

Adequate investment and recapitalization of inland waterways infrastructure will keep locks and dams operational for many years to come. Many believe that with more than half of the locks exceeding their design life, Congress cannot afford to wait much longer. We couldn’t sustain the status quo.