Below is a recent presentation delivered by Brandon Leister, president of the Buckeye Local Farm Bureau and member of the Board of Directors of Maricopa County Farm Bureau.

Just for background, there are more than 1,700 farms in Maricopa County -- farms of all sizes. We grow crops as diverse as the people who live here, using conventional (traditional) growing methods, organic methods or what is called biodiversity.

We face regulations on dust, water and quality, endangered species, zoning and building, etc. etc. Through all of that -- or in spite of all that -- we provide affordable, safe and abundant food.

Which brings us to today’s topic – why do farmers choose to grow genetically modified crops? 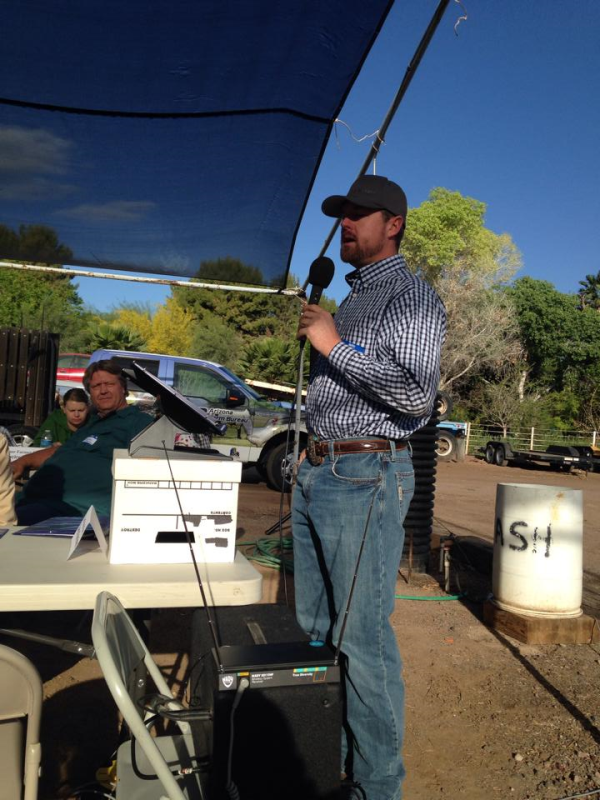 First, you need to know that farmers are just as concerned about your safety and the safety of your food as you are. Really. None of us want to harm anyone who eats what we grow, just like we would not feed our own families anything that would harm them.

We are normal people -- just like you -- only we have a bigger .

There has been a whole movement around the world to call genetically modified crops into question and the internet has been used to spread a lot of misinformation.

So, let’s start with basics. What are genetically modified crops?

Farmers have been modifying crops for thousands of years, ever since a man or woman first looked at some wild grain and chose to plant seeds from the plants with the most grains in each head.

We have done selective breeding, cross-bred hybrids and much more over the centuries.

Right now you probably see reference to “Genetically Modified Organisms” or GMOs.  Instead of cross-breeding plants for a desirable trait, which takes years, these plants have the trait implanted into the DNA of the plant.

Biotech Currently on the Market

In spite of what some people think, at this there are 12 crops and one fish on the market that have been genetically modified in this way.

The fish is the glow-fish, a with a green fluorescent protein gene from the jellyfish.  They glow neon in your fish tank. We don’t eat them.

Some roses and carnations have been genetically modified for the color blue.  We don’t eat those.

Cotton and alfalfa.  We don’t eat those, either, though we do consume some cottonseed oil. Cattle, horses and other livestock eat the alfalfa hay and .

So what is left that we do eat?  Eight foods:

Those four are made to resist insects and/or to tolerate a certain kind of herbicide.

On the first question, over at least 20 years and people eating probably something like 4 trillion meals with genetically modified ingredients, nobody has gotten sick from eating crops that were bred using biotechnology.

However, there are many websites that claim these crops have not been tested to see if they harm the human body. On the you can find any number of emotionally-charged illustrations of “Frankenfood” that would make you think eating any of these foods would turn you into a monster.

The truth is, nearly 2,000 studies have been done by independent scientists to test whether it is safe to eat these foods and whether they harm the environment.

A group of scientists from Italy compiled the list of studies and concluded that there is no evidence that genetically modified foods are harmful to health.  This is particularly surprising because Italy is one of the European countries that has been most outspoken against genetically modified crops.

Government agencies say biotech crops are safe -- the Food and Drug Administration, the U.S. Department of Agriculture and the Environmental Protection Agency.

But it’s not just these government agencies.  The World Health Organization, the National Academies of Science, the European Commission, the American Medical Association and the American Association for the Advancement of Science all agree there is no difference at all in food safety between genetically modified food and traditionally bred food crops.

There are also questions about food allergies.  The researchers working on modifying crops through biotechnology know to avoid all the major allergens when developing a new trait in a food crop.

What about the Environment?

Growing up, I specifically remember my Dad and Grandpa stressing over pink bollworm destruction in our cotton fields.  I knew of farmers who had sprayed pesticide 8, 10, even 12 times in a season with little relief in controlling them.

I know of a farmer in our area who completely abandoned the entire cotton crop on his farm, mid-season, because of the uncontrollable destruction of the pink bollworm

The timing could not have been any better when GMO cotton came to the market and literally saved our industry.

GMO cotton has simply had bT inserted into its DNA.  Now, my GMO cotton plants come out of the ground with natural resistance to those destructive pink bollworms.

Those 8, 10 and 12 bollworm-related insecticide applications were essentially eliminated in bT cotton and even without synthetic pesticide we have effectively eradicated the pink bollworm in Arizona.

Farmers seriously thought the world would be delighted when bT corn and cotton became available because it reduced the use of insecticides so much.  So we were taken off guard when certain groups opposed them so passionately.

Dr. Peter Ellsworth, a plant scientist at the University of Arizona, says that the use of insecticide on cotton has dropped more than 90 percent since our farmers started growing bT cotton.

That should be considered wonderful news for the environment!  Including all the beneficial insects!

Now I can plant cotton that has both bT and a gene making the cotton plant tolerant to the weed killer Roundup. I need to note here that Roundup is not injected into the plants!

Growing Roundup Ready plants is the key to conservation tillage and no-till farming. I can plant cotton directly into the stubble from a prior crop without plowing, and other field operations that disturb the soil.  But I must be able to kill the weeds with Roundup to make this tillage system work.

Conservation tillage is key in reducing the carbon footprint of crop production and in conserving both soil and water.  All of these are good news for the environment but it won’t work without genetically modified crops.

I can still choose to grow cotton that has not been genetically modified.  That seed is available.  But, as a farmer, I want the choice to grow the crops that are best for my farm and meet the needs of my customers.

What if I decided I wanted to grow sweet corn and sell it at a market in my community?  I would have three choices in seed to plant:

1st option -- I could choose to grow a traditionally bred sweet corn and use no pesticides on it at all.  I could correctly tell my customers that no pesticides had ever been used on this corn. But what do you think my customers would find when they peeled the husk back on their ears of corn?  Yes, they would likely find a corn cob infested with corn earworms with significant portions of the ear of corn already eaten and damaged.

2nd option -- I could choose to grow a traditionally bred sweet corn and control those damaging worms with insecticides. Now keep in mind that corn is vulnerable for about 20 days while the kernels are forming in the ears.  I would have to spray insecticide at least three or four – up to seven -- times to kill the adult earworms and the larvae as they hatch.

3rd option -- I could choose to grow a GMO sweet corn with the bT gene and not worry about worm damage.  But would you as a consumer be willing to purchase it if it had a big label that said “GENETICALLY MODIFIED”?  Would you be afraid?

I have heard of farmers who have chosen option 2 and not grown bT because their marketer won’t buy it, so they end up spraying insecticide every three days.

So, which should I grow?  Which would you prefer to buy? Corn with worm damage, beautiful corn that had been repeatedly sprayed with , or GMO corn?  Those are the kinds of choices that farmers face and some of our choices are restricted because of unwarranted fear on the part of consumers.

Did you know that researchers have developed a variety of wheat that is resistant to the aphids that cause a lot of crop damage? They can’t bring it to market because too many people are afraid of eating bread made from genetically modified wheat.

Did you know that a potato has been developed that is resistant to the fungus that caused the Irish potato famine?  It would save farmers from spraying fungicide on their potato crop as many as 15 times a season. Ironically, the government of Ireland has prohibited farmers from growing this new resistant potato. We do not have this potato available anywhere.

Testing is to develop a virus-resistant cassava plant. Cassava is a major food crop in much of Africa and the new variety would save a big portion of the food supply there.  That if it is ever allowed to go to market.

The same for sweet potatoes, one of the top 10 food crops in the world and heavily used in third world countries. Unfortunately, many African countries refuse to allow GM crops to be grown.

You may ask, “Why?”  Because around the millions of pregnant women and children suffer from Vitamin A deficiency, leading to permanent blindness and even death.  Putting a significant amount of beta-carotene in the food of rice-based societies could save millions of lives.

These arguments aside, how about the millions of acres of farmland in developing countries that do not have access to the pesticides and other crop protection technologies that we do?  What happens to the people those farmers are trying to when their crops are destroyed by insects or disease?  Genetically modified crops can save lives and feed millions.

And they are scientifically proven to be undeniably safe. No legitimate scientific question remains that questions its safety.

As you can see, I am a big proponent of using this very precise technology to improve crops.

But there is a significant movement to require that all food products containing biotechnology-modified crops be . I oppose this.

But some people say we ought to have the right to know what is in our food!

I would suggest that the only reason to put a “contains genetically modified organisms” label on a food product is to make you question whether it is safe to eat. A question that has already been answered. It would be there to try to frighten you. A scare tactic.

If there are people who still are concerned that there may be some danger in eating genetically modified foods, they can look for the “” label that can already be found on many food items.

Or they can simply choose organic food. Organic growers do not use genetically modified seeds.

As farmers, I reiterate what I said at the beginning. We are just as concerned about our food being safe to eat as you are.  We just ask for the freedom to choose which crops to plant --genetically modified or not -- as long as there will be no harm to people and the environment.