By Julie Murphree, Arizona Farm Bureau: Arizona’s very own Driggs was selected by the American Farm Bureau Federation to participate in the organization’s eighth Partners in Agricultural Leadership class. PAL is designed to help agricultural leaders accelerate their leadership abilities and solidify their roles as advocates for agriculture. 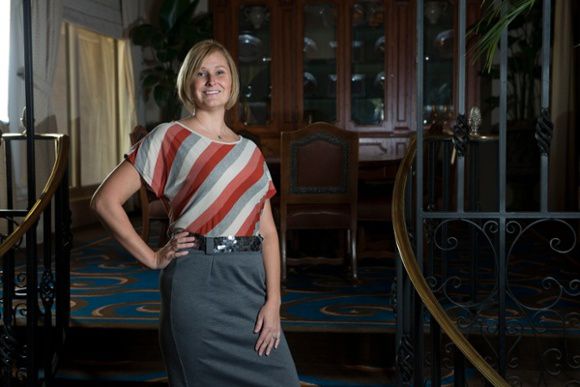 "I am so honored to have been selected," said Driggs. "I wouldn't have made it without the support and encouragement from Arizona Farm Bureau staff. I look forward to participating in this program."

Driggs, who began her interest in agriculture while in high school as an FFA student, received her bachelor’s degree from the Morrison School of Agribusiness & Resource Management at Arizona State University and her master’s in agribusiness from the same institution.

With much of her career at Morrison Family Companies that included management of a cattle ranch (with the summer headquarters located south of Flagstaff), Driggs was inspired by the work of her boss, farmer attorney Richard Neely Morrison, to pursue law school and focus on natural resources and water law. With her law degree from ASU's Sandra Day O'Connor College of Law, is a member of the American Agriculture Law Association and recently co-authored a paper titled, "Virtue Ethics and Sustainability Policy" for the Drake Agricultural Law Journal. owns her own company with the Morrison Family as her primary client.

“The new PAL class represents the very ‘best of the best’ among today’s farmers, ranchers and agri-business professionals,” AFBF President Bob Stallman said. “We look forward to working with them as they embark on an exciting journey that will equip them as vital contributors to our agricultural outreach efforts.”

Added Arizona Farm Bureau Government Relations Manager Ana Kennedy and former Pal participant from Class 5, "PALs is a rigorous leadership program that allows participants to build on while also providing the opportunity to develop new skills that will make them even better advocates for agriculture. I am excited that will have this opportunity."

To be eligible for the PAL program, applicants must have previously developed leadership skills built through participating in at least one Young Farmers & Ranchers program. This includes AFBF competitive events: Discussion Meet (“Sweet 16” finalist), Achievement Award (top 10 ) and Excellence in Agriculture Award (top 10 ). Retired members of the AFBF YF&R Committee and retired chairs of state Farm Bureau YF&R Committees also are eligible to apply. Driggs competed in YF&R’s 2014 Discussion Meet at the national level making it to the Sweet 16.

PAL training involves four learning modules designed to develop specific leadership skills while exploring components of leadership and its theories and philosophies. The modules build on one another over the two years of the program and include intense, in-person, hands-on training.

AFBF created the PAL curriculum as a high-level, executive training program that prepares participants to represent agriculture in the media, in public speaking, in congressional testimony and other advocacy arenas. Program graduates are given opportunities to step forward and promote awareness about issues important to farmers and consumers. The PAL program is sponsored by AFBF, the Farm Credit and Monsanto Co.

Driggs currently serves as the Maricopa County Young Farmer and Rancher Chairperson, Project CENTRL Alumni Council Vice Chair, and is on the Kyl Center for Water Policy Adjudication Committee. She is also active with the Arizona Cattle Growers.