Arizona Farming is An Expensive Proposition

By Julie Murphree, Arizona Farm Bureau: A recent Bloomberg news story reported that due to projected record harvests and lower prices, the United States Department Agriculture (USDA) has lowered its farm income outlook from the previous estimate, but the outlook still calls for a record farm income level of $120.6 billion. But, not so fast, AFBF Chief Economist Bob Young told Bloomberg news. Along with other farming throughout the U.S., Arizona farming will feel the impact.

“It’s important to note that while income numbers are staying up at nice levels, production costs are continuing to climb and climb,” Young said during an interview with Bloomberg News.

If realized, the projected farm income level will surpass the previous record, $118 billion set in 2011. The latest report shows a decrease of 5.9 percent from a February farm income projection of $128.2 billion. Compared to last year, the new estimate is up about 6 percent.

Young and other economists out that while overall farm income may be rising, the cost to farm continues to also rise. 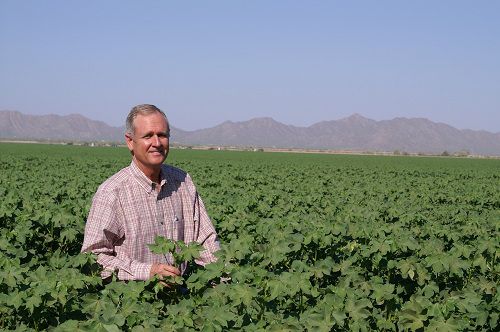 In an earlier issue of Arizona Agriculture, Dan Thelander, Maricopa County cotton, wheat and alfalfa farmer and former president of the Arizona Cotton Growers’ Association reflected on the cost to farm. “I recall my first year of farming in 1974,” said Thelander. “I sold half my cotton crop for $.70 per pound and the other half for $.55. More than 26 years later, again I sold half my crop for the same $.70. I forgot to polish my crystal ball. Farmers in the U.S. have seen productivity increases, but those have not really kept pace with the higher cost of production. Hopefully, the market will allow Arizona farmers to make a reasonable profit.”

And if one thinks farming is a lucrative gig just consider the Arizona farmer with 2,300 acres of cotton (today because of current cotton prices, most are growing less cotton). This farmer’s costs for a recent crop year include more than $300,000 in fertilizer costs, $141,000 in energy costs (includes gas, oil, diesel, etc.), $216,229 in water costs and $546,000 in land rental, excluding labor which, depending on the operation, can be the biggest expense. This input breakdown represents the farmer’s major costs for a particular and not some of the additional costs that can be incurred such as unexpected equipment repairs and more. Every farm budget must build in for the unexpected.

Granted, costs vary depending on the farm operation. Various agriculture commodities will highlight different costs of operation. Highlighting one of our Five “C” crops in Arizona is appropriate when considering how substantial input costs can be for a 2,300-acre cotton farm.

The Bloomberg article highlighted overall farm production cost increases: “Total farm production expenses will increase 0.3 percent from the USDA’s February estimate to $354.2 billion, the highest level on record, in nominal and inflation-adjusted dollars. The agency said it expects rent, labor and feed prices to increase the most among farm expenses this year.

“Among farmer costs, feed, the biggest spending component, is projected to increase 3.7 percent from last year to $61.3 billion. Fertilizers made by Potash Corp. (POT) of Saskatchewan Inc. and other companies will cost $28.2 billion this year, down 1 percent from last year, while seeds from Monsanto Co. (MON) and DuPont Co. (DD) are up 4.9 percent to $21.3 billion.”