Arizona Ranching In the Beginning ...

By Julie Murphree with Arizona Farm Bureau: Today’s Arizona ranch families epitomize the sturdy, stalwart Arizona ranch families of the past: hardworking, innovative, determined and possessed of a dream. So what was ranching or stock raising like long ago in Arizona? Well, our historians highlight some interesting points. 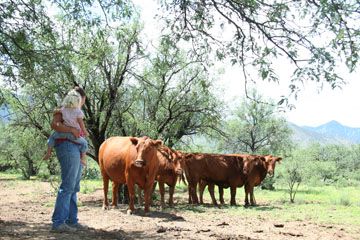 (Above photo: Members of Arizona Farm Bureau, Micaela McGibbon represents an Arizona ranch family that began ranching in this state in the late 1800's. They've carried the tradition of care for the land and cattle, hard work and innovation into the present time.)

Today, managed rangeland practices by our Arizona ranchers help preserve our lands including improving conditions for wildlife and our natural resources in general. In fact, today most who understand the environmental cycles, the dynamic ecosystems and the commitment to long-term preservation, contend that our ranchers ensure this symbiotic relationship between ranching and nature.