A lifetime resident of the once hay-shipping capitol of the world, Gilbert, Arizona, Richard Morrison took time out of his busy schedule to share with me the legacy of his family’s vast operations, and how it has impacted his life.An interview with Richard Morrison, water law attorney and Manager, Morrison Bros. Windmill Ranch, LLC.

Talk about your farm and ranch...

I grew up on a 2,500 acre cotton farm in the Gilbert/Higley area, where my parents and their partners also had a 5,000 head feedlot, then added a 6,000 cow dairy.  By the late 1970s the extended family had also acquired the Windmill Ranch that runs from Cottonwood to Flagstaff.  I grew up with some involvement in all of it, but since I spent most of my adult life working as a water lawyer, my daily life was not spent in operations until Dad passed in 2007. Then I became the manager of the remnant, which involved both the dairy and the cattle ranch, and what was left of the farm.  Most of your readers will know that the Farm Bureau building is on a portion of what was our family farm.  Family members still farm about 1,250 acres of farm land in the general vicinity of the Farm Bureau building. Today, I also own a farm in northeastern Colorado and have an interest in a company with vast acreage (of farm land) in Brazil. 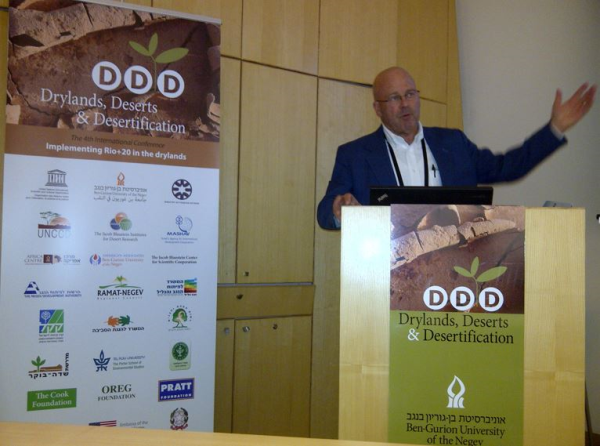 Richard Morrison giving a lecture in Israel at Ben-Gurion University of the Negev on lessons learned from Arizona's experience of the Central Arizona Project.

The impact of urbanization on our operation has been huge, going all the way back to the first subdivisions in the area in the early 1960s.  Unlike some landowners, we decided NOT to develop as quickly as possible.  Our family plan involved developing as slowly as possible, so as to allow Marvin and Kenneth Morrison the joy of continuing to manage the operation they developed, and to do so for the rest of their lives—which they did.

Certainly mechanization has had an impact on our labor requirements, water conservation became increasingly important, BT cotton (transgenically modified) reduced pesticide usage, and the expectations of our urban neighbors about dust control and feedlot odors proved to be a challenge.  For most producers, the regulatory environment just became more and more difficult over time, which is one of the reasons I thought I might help our family and the industry even more by working as a lawyer.

At the cattle ranch, we tried to innovate and modernize but to be honest, found that change doesn’t happen as fast in that context.

From my childhood I marveled at what irrigation water could do to the desert, and I came to love the lifestyle.  I was also extremely proud of my father, who was President of the Arizona Farm Bureau Federation when I was a young teenager, and I hoped to earn his respect within the same industry.  The FFA experience was formative for me in high school, and when I became State President and National Vice-President of the FFA, I think my path was set.  I continued farming in Florence even after I started practicing law (a real challenge, to be sure), and I served as President of the Gilbert-Mesa-Queen Creek local during that time.  By virtue of that office I also enjoyed serving on the board of the Maricopa County Farm Bureau, which gave me a better understanding of what other farmers in the county were doing to meet their own challenges.  Eventually, I worked full time as a lawyer but even then most of my work was on behalf of farmers and ranchers, which was exactly what I had hoped for.  That was the work I wanted to do. 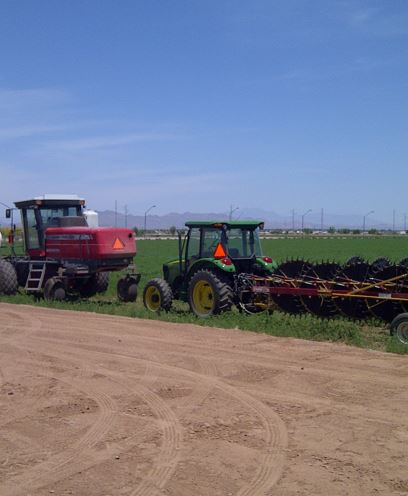 Ready to start working on the next alfalfa field in Gilbert, AZ.

What generation of farming/ranching are you?

I am the third generation of Morrisons who have farmed in Arizona.  On my mother’s side of the family (her father was Clyde Neely, a director of SRP) I am the fourth generation farming in Arizona. I have two more generations behind me in our family.

Will anyone in your family ... younger generation ... pursue farming and/or ranching?

I have a daughter and son-in-law who helped us manage the cattle ranch, and who are expected to continue with horse breeding through time.  My grandson is two months old, so it is a little too soon to predict about him. 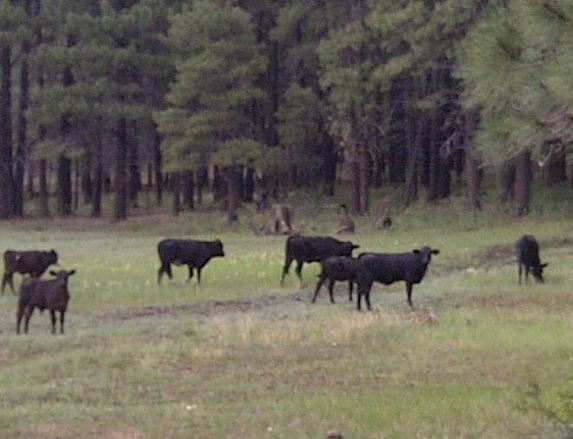 Some of the cattle up on the Windmill Ranch between Cottonwood and Flagstaff.

Would you ever consider growing an emerging crop or changing your farm or ranch model?

In addition to running a commercial scale operation, we looked at niche marketing for our cattle ranch, targeting the local/regional market for natural beef in the Flagstaff area.  We found an existing demand there but the efficiencies were lacking as far as the natural beef part of our operation was concerned.  It was not prudent to continue that new model in our location.  We also tried our hand at agri-tourism, but frankly decided we prefer to be conventional producers.  If I were to start over with a cattle breeding operation, I would do it on privately owned land on the high plains.  Ranching on public land in Arizona exposes the operation to excessive levels of vandalism, and unreasonable constraints on management flexibility.  It also costs the producer dollars and cents because of the transportation costs involved in getting calves to the feedlots that want them.

If not different model, how about different type of market for your product: Explain?

You know what came to mind when I read that question?  My father always said “Never be the first one to try a new technique, technology, or market.  Don’t be the last one to try them either.”  I think all of us are continually considering our options.  My limited involvement in Brazilian farm land, a Malaysian palm plantation, and a Norwegian salmon company illustrate my interest, but I am cautious about investments in companies I cannot control.  I looked throughout Turkey and Eastern Europe last year for an operation that might attract my investment dollars, but I didn’t see an opportunity on that trip that appealed to me personally.

I am board chair of the Morrison Institute of Public Policy at ASU.  When the Institute was started 32 years ago, we hoped that it would have more involvement in agricultural issues than it has actually had, but it is launching a major initiative on water this year that will be of interest to all farmers and ranchers.  In a related context, I am also a member of the External Advisory Board for the Arizona Water Resources Research Center at the U of A.

I serve as a Trustee for the Farm Foundation in Chicago, which has an aggressive educational agenda and serves as an objective, non-partisan convener for meetings on virtually all ag policy issues.

Finally, I am very active in a host of church-related activities because I am also an ordained priest in the Episcopal Church.

I served on the USDA National Advisory Council for Rural Development in 1987-88, which was while I was in seminary in California.  That was an unusual combination of activities, for sure.

I have had a very satisfying career as a water lawyer, representing several irrigation districts through the years, but I think I also taught agricultural law very well at the Morrison School of Agribusiness at ASU.  (I developed some expertise in several disciplines of the law important to farmers and ranchers.  I also served on the national board of the American Agricultural Law Association from 1999-2003.) 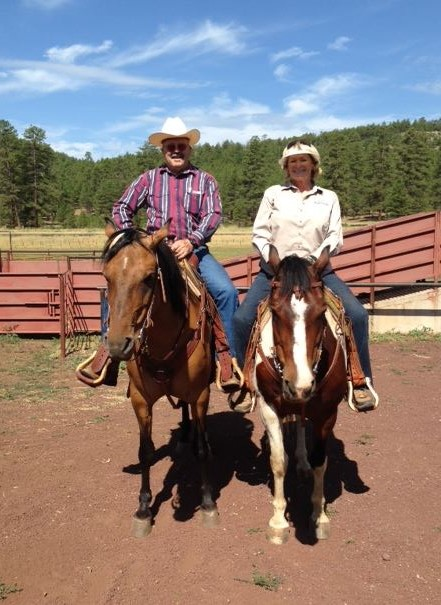 From my childhood I viewed Farm Bureau as family.  Though I didn’t spend as much time with Farm Bureau as I would have liked while practicing law on a full time basis, I have transitioned now into a part time arrangement with the law firm.  I hope to spend more time in the next several years working on Farm Bureau policy, because I also think Farm Bureau is a very effective advocate on ag policy issues. I try to participate in the annual policy meetings when invited.

Farmers will have to be even more attentive to energy challenges, soil science, environmental challenges, drought, and ever-changing market conditions.  Production methods are important but marketing seems to be the perennial challenge associated with domestic “overproduction.”  The United States has done a better job of exporting its technology than its commodities.  Collaboration and continuing education will be critically important.