Membership Matters: Which Bug in Arizona gives you the Shivers?

By Peggy Jo Goodfellow, Arizona Farm Bureau Marketing Manager: I’ve lived in the desert for over 40 years now so you’d think I’d be used to seeing the common everyday bugs we have in Arizona and for the most part I am. But when I encounter a scorpion anywhere around my home, it sends a shiver up my spine. 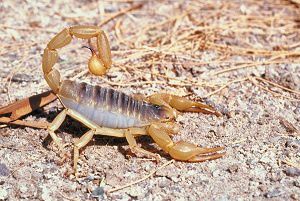 a few things you should know about some of Arizona’s most common pests.

Ants:               Ants are a major problem throughout the United States and Arizona is not .  Among the most damaging are fire ants, which have a painful sting and carpenter ants, which tunnel into damp wood to build their nests.

Cockroaches:   Many different species of cockroaches live in Arizona and all are for their ability to carry germs. Two types make their homes indoors, the German and brown-banded species. They are extremely hard to get rid of since they eat not only human and pet foods, but such materials as leather and glue.

Spiders:           Arizona is home to both the black widow and the brown recluse.  These spiders have dangerous bits, making it important to seek medical treatment right away.

Scorpions:       All scorpions are considered venomous, though most have a sting no worse than a bee sting. The exception is the Arizona Bark scorpion, that is about 2-3 inches long including the tail. Their venom is highly toxic causing intense pain and in some cases breathing difficulties and even convulsions.  Swift medical is always recommended.

Ticks:               More than 25 species of ticks live in Arizona. The most common the brown dog tick. While these ticks prefer dogs, they will feed on humans. They can carry Rocky Mountain spotted fever that should be treated with antibiotics as soon as possible.

Bees/wasps:    Bees and wasps are common in Arizona, especially during the summer months. Although they are generally more annoying than dangerous, allergies are not uncommon. The “killer bees” are more aggressive than other types of bees and tend to attack in swarms.

Editor’s note: For more information on our member benefits including our regional benefits go to Arizona Farm Bureau’s member benefits page online. Or, download the Member Benefits app to your smart phone for easy, everyday access to your benefits.