The impact of the WASDE report won’t have as dramatic an impact on Arizona agriculture in terms of commodity pricing since we’re not a large corn and soybean growing region. However, lower corn prices (due to the increased estimate on corn production) should help ranchers and livestock producers that purchase lots of corn for feed. So raising quality Arizona beef might not be as expensive for our ranchers! 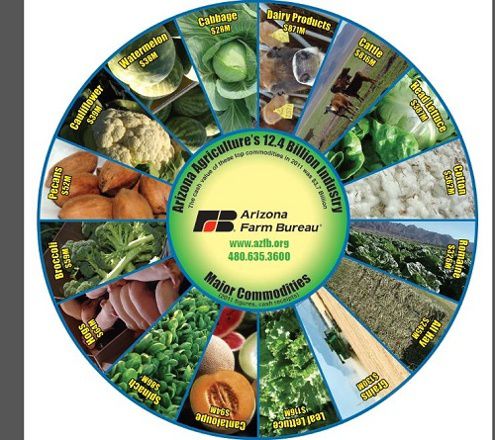 While Arizona grows field corn for livestock, the Midwest is the major region for corn and soybean farming. In Arizona, our top farm commodities dairy, beef, an array of leafy greens including leaf lettuce and romaine lettuce and a variety of fruits.

“Up to this point, USDA has been using a statistical model for corn that predicts yield based on planting date, and temperature during the growing season,” said Todd Davis, American Farm Bureau Federation economist. “The August report, through the rest of the year, will incorporate farm production information in the supply and demand estimates.”

August’s WASDE report projected the 2013 corn crop at 13.763 billion bushels, which would be a record if realized, and a 2.98 billion bushel increase from 2012’s drought-stricken crop. The report estimates the 2013 corn yield at 154.4 bushels per acre, a reflection of the late planting season and cool, dry weather in the western Corn Belt, according to Davis.

This is making some market analysts to predict a continuing collapse in corn prices. A year ago around this time, corn was selling for around $8.30 a bushel. Last Friday it closed at $4.65 a bushel.

Demand in Corn Needs a Boost

So then, global demand for corn should satisfy this nearly 3 billion bushel increase in corn, right? Some contend this may not come from the usual sources. Cattle ranchers have reduced their beef herds as corn prices rose, and you can’t bring a cattle herd back to previous numbers overnight. Plus, some ranchers may not want to bring back herd size. One reason, prices for their “feeder” cattle are stronger than ever before; supply and demand that more cattle will push the price down again.

On the ethanol front, its production takes about 30 to 40% of the U.S. corn crop. But even that production has hit a plateau because people are driving less, pushing down demand.

On the Soybean Front

“Due to the late planting season for both corn and soybeans, especially in the western Corn Belt, farmers should expect future reports to provide more accurate estimates that may differ significantly from Monday’s estimate,” said Davis. “While the 2013 corn and soybean crops do not look excellent everywhere, the corn and soybean markets are anticipating much larger crops, which will lead to lower prices and tighter profitability margins for 2014.”