Where's the Beef in Arizona! A Recent Study Can Tell You

By Julie Murphree, Arizona Farm Bureau: Thanks to a recently-completed study by the University of Arizona’s Cooperative Extension, Department of Agriculture and Resource Economics, we can tell you just about everything you ever wanted to know about Arizona’s beef industry – at least economic impact to our state.

It’s a pretty impressive story, thanks to the researchers on the research project, “The Contribution of the Beef Industry to the Arizona Economy:” Ashley , George Frisvold, Russell Tronstad and Trent Teegerstrom.

Say the researchers, “Cattle ranching remains an important part of Arizona agriculture, making a variety of economic contributions to Arizona county economics and to the state economy as a whole.” 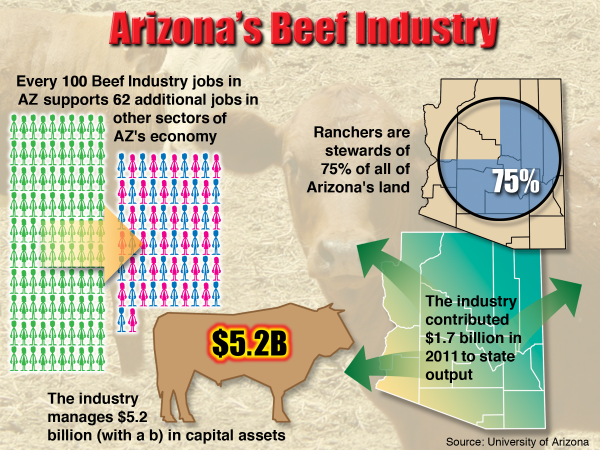 Key findings in the study ...

What Did the Study Find?

The major findings in the report provide a great overview of what our cattle industry is contributing to Arizona.

?The total market value of capital assets of Arizona beef cattle operations is more than $5.2 billion. These assets include land, buildings, and machinery.

?The value of these capital assets average more than $1.2 million per ranching operation.

? In addition to these capital assets, the Arizona beef industry manages 71 percent of the state’s cattle and calf inventory, which is valued at more than $1 billion (with the dairy sector managing the remaining 29 percent). These inventories represent valuable assets that can be placed at risk by prolonged drought or weather extremes.

?In 2011, the total number of cattle commercially slaughtered in Arizona was 565,000 head, producing a total live weight of more than 721 million pounds.

?Economic base analysis identifies which industries are basic: industries that generate relatively more jobs than the national average and bring money from outside the region into the local area. Outside of the urbanized, metropolitan areas (Maricopa and Pima counties) and Mohave County, where specialization in mining is important, ranching remains a basic sector in Arizona county economies. Arizona’s remaining 12 counties are more specialized in cattle production than the nation as and employ relatively more people in ranching. Looking only at state averages can understate the continuing importance of ranching in Arizona’s rural counties.

The full report is available online.